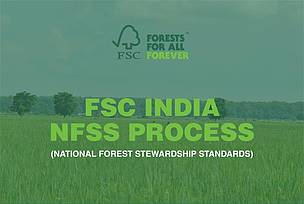 Public Consultation for FSC
© WWF-India
Forest Stewardship Council (FSC) is a global, not-for-profit organisation which is responsible for setting the standards for what a responsibly managed forest is – both environmentally and socially.
FSC International endorsed a Standard Development Group (SDG), which was made up of six members, to interpret FSC requirements in relation to existing risks and opportunities of the Indian forestry sector from an environmental, social and economic perspective. It was later expanded to nine members in 2018. The FSC National Standard for India – which has been under development since December 2016 – provides a basis for entities wanting to validate their forest management practices against a set of internationally agreed principles and criteria for sustainable forest management.
Till now, the standard development process included several rounds of discussions and feedback from the SDG. Draft 1.0 of the standard was open for public consultation for a period of 60 days. Draft 2.0 was developed after incorporating feedback from the first public consultation, which was followed by field testing on low and high intensity managed forests in Assam and Odisha. A total of nine meetings were held over the course of two years. The resulting field-tested Draft 3.0 is now available for feedback and comments from the public, from April until the end of May. The resultant draft will be sent for approvals in June.
The Draft 3.0 can be accessed at: https://blogapac.fsc.org/2019/04/12/second-public-consultation-of-indias-fsc-national-forests-stewardship-standard-now-opens/
Please provide your inputs before 12 June 2019.