Buying is Stealing: TRAFFIC urges people not to buy and use medicines made from protected wildlife species | WWF India

Buying is Stealing: TRAFFIC urges people not to buy and use medicines made from protected wildlife species 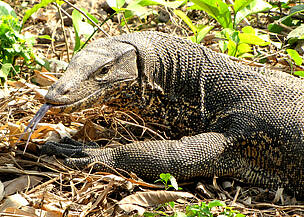 Water Monitor
© Ananda Banerjee/WWF-India
New Delhi: TRAFFIC and WWF-India are urging people not to buy and use medicines made from Monitor Lizards Varanus species. Monitor lizards are illegally targeted for their copulatory organs (male's hemipenes) that is structurally similar to “Hatha Jodi" the root of the Tiger's Claw Martynia annua; a plant with diverse traditional uses in Ayurveda. As a consequence, the reproductive organs of monitor lizards are often disguised as Hatha Jodi and traded illegally.

To highlight this threat to monitor lizards from illegal wildlife trade, TRAFFIC’s India Office with support from WWF-India, is raising awareness about the exploitation of monitor lizards. The key message of the online campaign is “Buying is Stealing” which warns people against buying medicinal products made from monitor lizards, among other protected wildlife species.

“The demand for “Hatha Jodi  is one of the major drivers of poaching and illegal trade of monitor lizards in India today,” said Dr Saket Badola, Head of TRAFFIC’s India office. “There is evidence that populations of the Bengal Monitor, Common Water Monitor and Yellow Monitor are being impacted as a result, so it is therefore crucial that people understand the gravity of threat posed by illegal wildlife trade.”

Monitor lizards are essential to agricultural and forest ecosystems as they feast on
insects, rodents, bird eggs, snakes, fish, and crabs, thereby regulating their populations. In some regions, they are also a source of food for other predators. Monitor lizards are keen scavengers and play a significant role in biomass decomposition and recycling. They clear carrion and help in controlling the spread of disease.

Monitor lizards are also threatened by large-scale habitat degradation due to urbanisation and rapid expansion of agricultural lands, pollution, overfishing, and infringement of forests and water bodies. Human-wildlife conflicts and retaliatory killings also pose a direct threat to the survival of monitor lizard species.

Dr Badola further adds, “Think twice before buying monitor lizard meat or using medicinal products made from monitor lizards and other protected wildlife. Removing these animals from their natural habitat means they can no longer play their role in maintaining a healthy ecosystem."

With this campaign, TRAFFIC is also releasing a new factsheet[1] on monitor lizards to help people understand the species, role in the ecosystem, protection status and the threats faced due to over-exploitation and illegal wildlife trade. You can download the monitor lizard factsheet at https://join.wwfindia.org/illegal-wildlife-trafficking/


About the campaign:
The new online campaign has been launched by TRAFFIC, India office and WWF-India to create awareness about various wildlife species that do not get the deserved conservation attention but are heavily poached and trafficked. In the coming weeks, TRAFFIC and WWF-India will use this opportunity to feature five such species viz., otters, seahorses, red sand boa, Tokay Gecko and monitor lizard. The campaign is live on FACEBOOK and TWITTER.