India switches-off to Speak up for Nature this Earth Hour 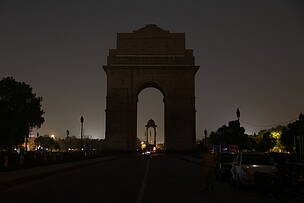 India Gate after switch off
© WWF India
New Delhi: Over the last 15 years, the lights-off moment has seen entire streets, buildings, landmarks, and city skylines go dark - an unmissable sight that drew public attention to nature loss and the climate crisis. This Earth Hour, across India, we witnessed various landmarks participating in the global switch off to #SpeakupforNature.

Some landmarks that stood in solidarity with Earth Hour 2021 by switching off their lights were:

The COVID-19 pandemic has revealed to us a situation of utmost urgency concerning the human-nature balance. The destruction that the pandemic got with itself was disastrous, the consequences of which we are still witnessing is a warning for us to ‘Speak Up for Nature’ and #connect2earth.

Earth Hour celebrated this year on 27th March is the largest global grassroots movement for the environment, every year brings together millions of people, businesses and leaders from around the world to shine a spotlight on the urgent need to address nature loss and climate change.

About Earth Hour
Earth Hour is WWF's flagship global environmental movement. Born in Sydney in 2007, Earth Hour has grown to become one of the world's largest grassroots movements for the environment, inspiring individuals, communities, businesses and organisations in more than 180 countries and territories to take tangible environmental action for over a decade. Historically, Earth Hour has focused on the climate crisis, but more recently, Earth Hour has strived to also bring the pressing issue of nature loss to the fore. The aim is to create an unstoppable movement for nature, as it did when the world came together to tackle climate change. The movement recognises individuals' role in creating solutions to the planet's most pressing environmental challenges and harnesses the collective power of its millions of supporters to drive change.