CORALS AND CRABS: MARINE LIFE IN THE REEFS OF GOA 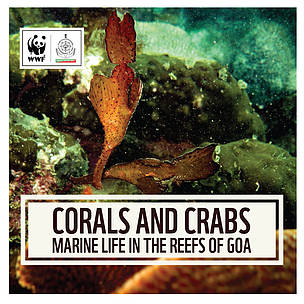 The small state of Goa, is endowed with a dazzling array of marine biodiversity along its coastline. These species span across the open waters off Goa’s coast, to the reefs of Grande Island, they inhabit coastal mangroves, and can even be found all along Goa’s popular seashores. This biological treasure is the backbone for fisheries - which have been a traditional occupation and a way of life in this region; it also supports the marine nature-based tourism industry, and thus significantly contributes to the state’s economy and to peoples’ livelihoods.

We live in an age of accelerated human impact on marine ecosystems everywhere. Goa is no exception to this case. Besides human-induced climate change, these marine ecosystems are also threatened at local levels by excess human use, including fishing pressure, unregulated tourism, and unplanned coastal development.

Just as significant as those threats, however, is the knowledge gap on marine biodiversity as a whole. Marine biodiversity in Goa has thus far not been adequately studied to inform good management practices. Most of the current knowledge on marine ecosystems is restricted to the region’s fishing communities and scientists.

The best way to bridge this knowledge gap, as with conservation everywhere, is to make the knowledge of biodiversity accessible to every citizen – be it a student or enthusiast, scientist or hobbyist, local resident or visitor. And in turn, conservation is helped immensely when citizens explore closer natural spaces, document what they see, and bring local biodiversity and its conservation into the public domain.