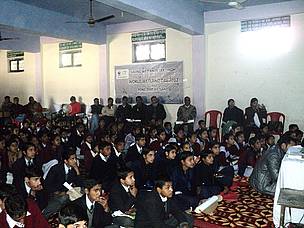 More than four decades ago, a Convention on Wetlands called the Ramsar Convention, was signed and adopted on February 2, 1971, in the Iranian city of Ramsar. Since then, many government agencies, NGOs and citizens have taken to raise awareness on wetlands in general and the Ramsar Convention in particular. It is celebrated as the World Wetlands Day, every year, the world over!

With an aim to raise public awareness on wetlands and their conservation, WWF- India along with the State Council for Science Technology and Environment and the Wild Life Wing of Forest Department and Education Department, organized World Wetlands Day celebrations at Govt. Sr. Secondary School, Nagrota Surian, Kangra on 2nd February 2012.

With the theme for the year being, “Wetland and Tourism”, WWD, this year, is focused to ensure well-managed tourism practices, mitigate adverse effect of tourism and educate tourists on the value of wetlands. Pong Dam is one of three Ramsar sites in Himachal Pradesh. It is one of the largest man made wetland built in 1974 across the River Beas and was declared a Ramsar Site in 2002.

With an aim to spread awareness on the importance of wetlands as an abode to birds, many painting and declamation contests were organized for approximately 250 students from ten different schools in Shimla. Ms. Usha Sharma, Principal of GSSS Nagrota Surian and Mr. D.S. Dadwal, ACF, Wild Life, Nagrota Surian addressed the students and explained the role they could play in the conservation of these wetlands.
Pong dam supports 415 bird species belonging to 56 families. The students were acquainted with the wetlands of Shimla, Kullu, Kinnaur, Lahaul, Spiti and Chamba and the various initiatives taken by WWF- India to conserve them.

Mr. Satish Kumar Gupta, Divisional Forest Officer, Wild Life, Hamirpur also the chief guest of the event, motivated the students to take interest in environmental issues. Speaking on the importance of the wetland as a transit site for various migratory birds, he stressed on everyone’s responsibility to conserve its biodiversity.

World Wetland Day was also observed by Govt. Sr. Sec. School, Joghon, Nalagrah in Solan district. Students were taken to the Ropar wetland which was created in 1952 with the construction of Bist Doab canal which receives water from River Sutlej in Punjab. Three major wetlands: Harike, Kanjli and Ropar have been designated as Ramsar sites in Punjab. These wetlands serve as aquatic ecosystems and harbour fish, waterfowl and other flora and fauna. The students were acquainted with the salient features of the wetland and the impact of tourism. These events were aimed at spreading awareness on the importance of wetlands and thus gathering support from the local communities for the same! 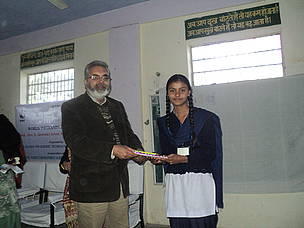