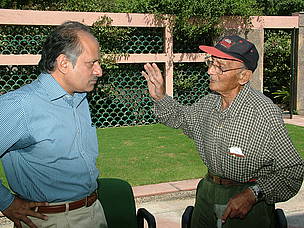 Billy Arjan Singh, renowned conservationist and recipient of this year's Padma Bhusan, with Ravi Singh, SG & CEO, WWF-India, talk about the future of conservation during the former's visit to the WWF-India Secretariat.
© Anshuman Atroley

Arjan Singh or “Billy”, as he is popularly known, has devoted more than 60 years to wildlife conservation in the country. He was instrumental in establishing the Dudhwa Tiger Reserve, in 1988, and his love for tigers is reflected in the fact that his house is named as “Tiger Haven”. Today, Dudhwa is the only tiger reserve in Uttar Pradesh and forms a vital link between Nepal and Terai Landscape allowing tigers and other wildlife to move freely across the area.

Ravi Singh, SG & CEO, WWF-India, in his congratulatory message to Billy said, “It is a great moment for all of us in the conservation world. We are honoured by the government’s decision to recognise one of the pioneers of tiger conservation in the country”.

In another award ceremony, earlier this January, Billy was conferred the Yash Bharati award by the Hon’ble Chief Minister of Uttar Pradesh, Shri Mulayam Singh Yadav. The award includes five lakhs in cash; a citation and a shawl, which were presented at a ceremony in Lucknow, the capital of Uttar Pradesh. A true conservationist, Billy, in his brief speech at the award ceremony, called upon the state government to provide more financial assistance to the Dudhwa National Park.

In 2004, Billy received the coveted Getty Award which is administered by WWF on behalf of the Getty family. The award recognises innovation in the field of conservation and in creating public awareness. The Getty Award, which carries $ 100,000 as the award money, was shared with Tony Larocci, a commercial fisherman from Florida and one of the leading advocates for sustainable fishing world-wide.

Billy Arjan Singh, renowned conservationist and recipient of this year's Padma Bhusan, with Ravi Singh, SG & CEO, WWF-India, talk about the future of conservation during the former's visit to the WWF-India Secretariat.
© Anshuman Atroley Enlarge