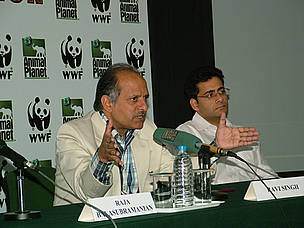 PLANET ACTION takes an unique approach in addressing some of the current issues facing wildlife and eco-systems today. The series follows an international team of seven enthusiastic amateur environmentalists as they are immersed in six different conservation projects. Working under the pressure of strict deadlines and tight budgets in remote locations, the team must work together to accomplish each mission. Over six weeks, we see conservation in action as the team tackles projects to make a real difference. The journeys range from saving endangered Leatherback Turtles in Panama to planting 100 trees in the heart of Borneo’s rainforest to help the Orangutans fight for survival.

Raja Balasubramanian, Brand Director - Animal Planet said, “Animal Planet has presented many entertaining programmes, both from India and abroad, to increase the understanding on wildlife extinction and environment deterioration. Planet Action is an eco-reality programme that, besides informing, will entertain viewers by presenting them all the emotion and drama of a group of amateur environmentalists tasked with real-life challenges.”

Speaking at the press conference, Ravi Singh, SG and CEO, WWF-India, said, “Planet Action is a great example of active media partnership to showcase the tough work of conservation to the world. I am hopeful that more and more people will be sensitised about the threats to the environment and to it's species and the urgent need to conserve the same.”

The diverse group of participants came together from around the globe to pursue a common cause. Team members hail from Venezuela, Vietnam, Sweden, Australia, Brazil, UK and USA. WWF experts are on hand as ‘mentors’ during each challenge, as the team learns firsthand about the realities of conservation while at the same time coping with extreme conditions, unfamiliar cultures and the pressures of protecting wildlife.

Can the team put personal issues aside and cooperate as a group to undertake these important challenges? PLANET ACTION captures all the emotion and drama as tempers fray and moods swing while the team works together towards their ultimate goal – protecting the future of the animals with whom we share the planet.

About Animal Planet
Animal Planet grabs you. The world’s leading animal entertainment brand, Animal Planet reaches 185 million subscribers in 160 countries in Europe, Asia, Latin America, Africa and the Middle East with programming customized in 24 languages. Offering intrigue, adventure, humor, relationships, life and death, Animal Planet is the only television network on the planet dedicated to people’s fascination with animals. First launched outside of the United States in Europe in 1997, Animal Planet is a joint venture between Discovery Communications and BBC Worldwide in all international regions except the United Kingdom and Italy.

About WWF-India
WWF-India is the largest and one of the most experienced conservation organizations in the country. Since 1969, WWF has been consistently working for the protection and conservation of environment and towards promoting harmony based on sustainability between human beings and nature.

About WWF
With almost five million supporters distributed throughout five continents, WWF has a global network active in over 90 countries and can safely claim to have played a major role in the evolution of the international conservation movement. WWF’s mission is to stop the degradation of the planet and to help people live in harmony with nature.