Earth Overshoot Day 2017 is August 2, the earliest date since ecological overshoot began in the early 1970s*

Posted on
02 August 2017
0 comments
New Delhi:  On August 2, humanity will have used nature’s budget for the entire year, according to the Global Footprint Network*. The world has already exhausted nature’s budget for the entire year and from this day on and for the rest of the year, we will be using more resources than the planet can renew in a year. This means that the world will now be operating in overshoot for the year – exerting excess pressure on the planet for any resources drawn.

Since 1961, the first year consistent United Nations statistics were available, humanity’s demand on resources has gone from being within the means of what nature could support to significantly over budget.  WWF’s Living Planet Report (LPR), released in 2016, revealed a 58% decline in global populations of fish, birds, mammals, amphibians and reptiles between 1970 and 2012.  This decline is a clear sign that we are pushing our planet beyond its ability to sustain us and human activities have been the primary drivers of this decline in biodiversity and ecosystem services. The estimated level of resources and ecosystem services required to support human activities today is just over 1.7 Earths, fast moving to becoming 2 Earths by 2030.

As the global population has grown and consumption has increased – particularly with respect to carbon emissions – Earth Overshoot Day has moved from late September in 1997 to August 2 this year, the earliest date since ecological overshoot began in the early 1970s. According to the LPR, The Ecological Footprint (the rate at which we are consuming vis-a-vis the resources generated by the planet) of the top five countries makes up about half the global total. Analysis of the 2014 National Footprint Accounts reveals that China (16 per cent) and the USA (15 per cent) generated 31 per cent of the world’s total carbon footprint. The LPR further states that when multiplying population with per capita demand, India shifts from the 136th-largest footprint per capita to the third largest in total. This implies a low personal footprint at an individual level, but a challenge when aggregated by population.  This equation will be further complicated as wealth grows and consumption patterns change. 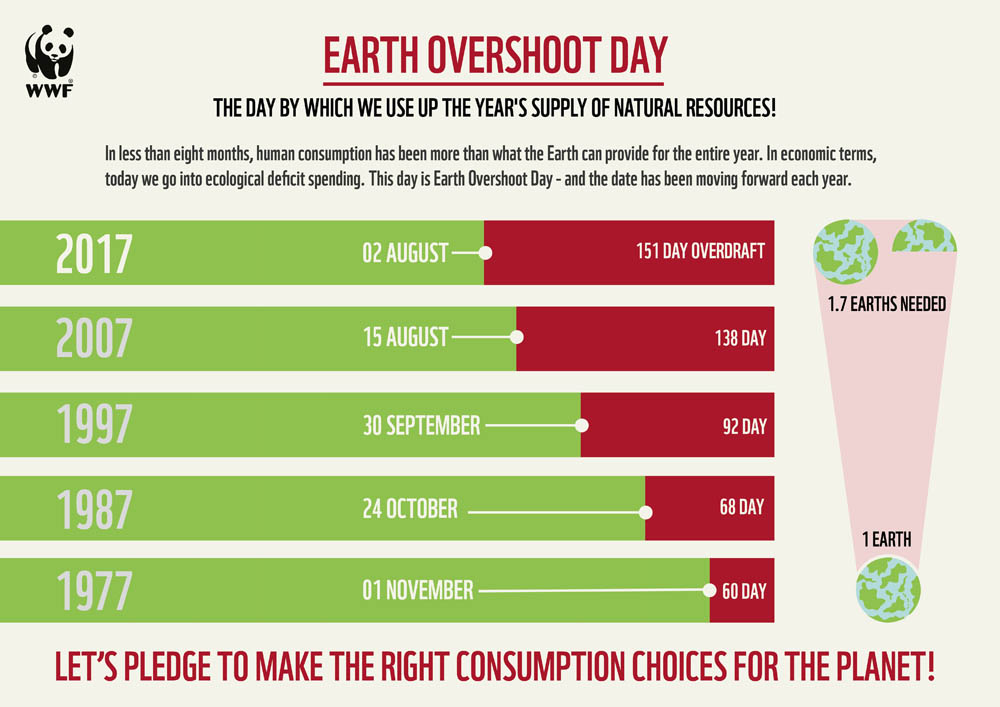 Speaking on Earth Overshoot Day, Dr. Sejal Worah, Programme Director, WWF-India, said, “Economic growth and development is critical for India – improved education, health, and job opportunities along with better infrastructure are much needed.  However, if not properly planned and implemented, such growth can also pose a significant challenge to the natural environment. The message from our planet is clear and one we cannot ignore.  The future lies in development trajectories that also reduce humanity's ecological footprint. We need to adopt innovative technology and sustainable lifestyles and to preserve this planet - citizens, business and government must all play their part.”

Of all the environmental challenges facing India today, water stands out as a key area where better management is most needed.  Fourteen of the twenty major river basins in India are already water stressed and will move towards extreme water scarcity by 2050 (1).  Seventy percent of our surface water is polluted and 60% of India's groundwater resources are expected to be in a critical state within the next decade (2).  This poses direct challenges to livelihoods, health, food production and energy generation.  Water being a shared resource, needs a common approach and risks to water security must be understood as ‘shared risks’ – between multiple and often competing users - and must be responded to accordingly.

However, according to experts at the Global Footprint Network, all hope is not lost and we can reverse the trend.  If we moved Earth Overshoot Day back 4.5 days every year, we would return to using the resources of one planet by 2050.  “Our planet is finite, but human possibilities are not. Living within the means of one planet is technologically possible, financially beneficial, and our only chance for a prosperous future,” said Mathis Wackernagel, CEO of Global Footprint Network and co-creator of the Ecological Footprint. “Ultimately, moving back the date of Earth Overshoot Day on the calendar is the name of the game.”