Posted on
17 November 2022
New Delhi: Research by TRAFFIC and WWF-India highlights the scale of the threat that sea cucumbers, belonging to the class Holothuroidea, face due to unsustainable and illegal collection and trade in India.

The new report – In Deep Waters: India's sea cucumbers in illegal wildlife trade –found at least 101.40 tonnes and 6,976 sea cucumber individuals in illicit wildlife trade in India for 2010-2021. It was released ahead of World Fisheries Day on 21 November 2022, a day dedicated to highlighting the critical importance of healthy ocean ecosystems and the need to ensure sustainable fisheries stocks. 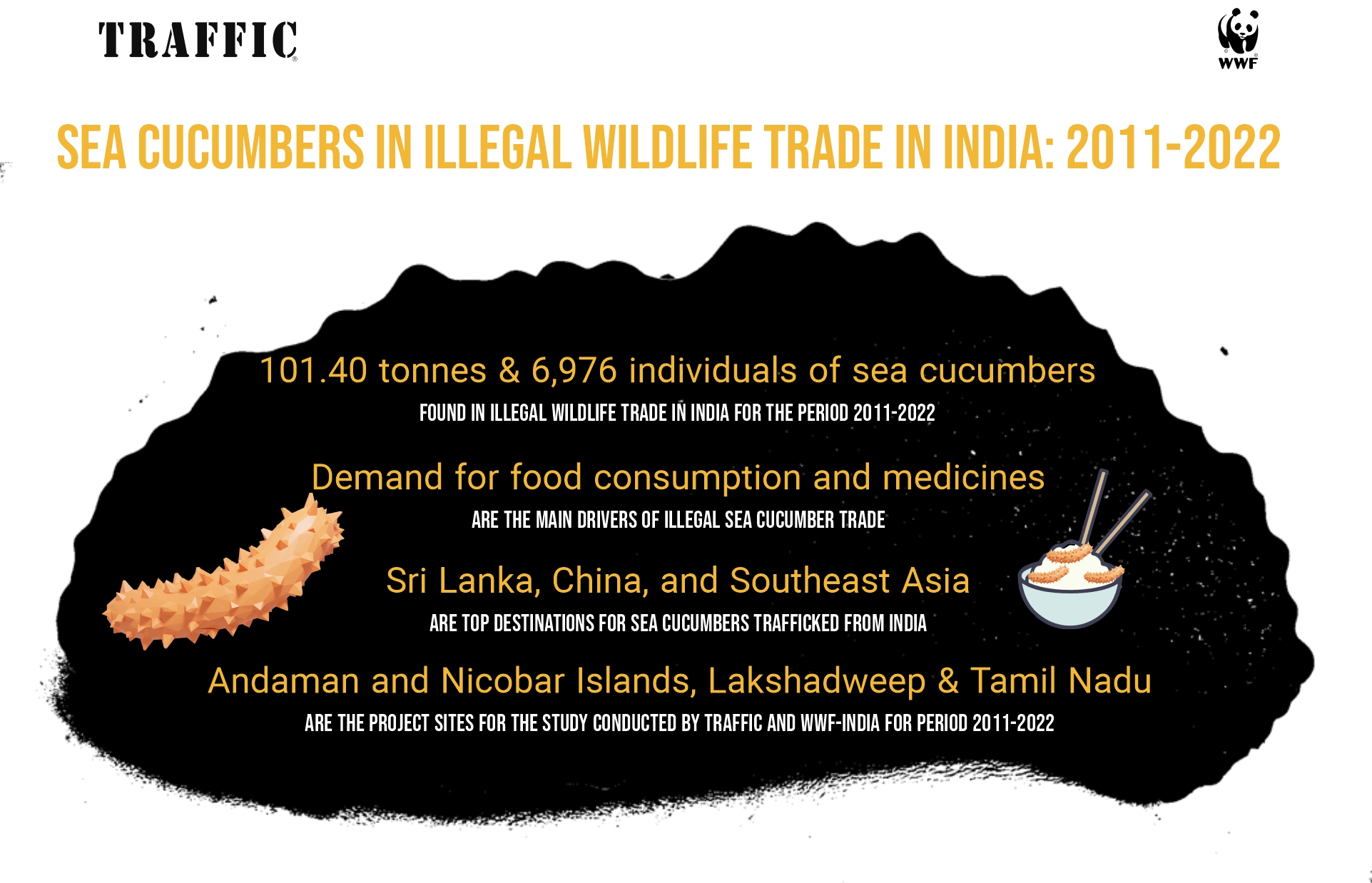 Mr Ravi Singh, Secretary General & CEO of WWF-India, stresses the need to strengthen the protection and conservation of sea cucumbers in India. He said, "Adequate measures to curb trafficking and illegal trade of the species through timely enforcement action is necessary. It is also equally important to raise awareness about the legal and conservation status of sea cucumbers among the fisheries through targeted campaigns in local languages".

Sea cucumbers are crucial to the marine ecosystem as they consume decomposing organic matter and convert it into recyclable nutrients for other marine life. In addition, feeding and excretion by sea cucumbers increase seawater's alkalinity, buffering the ocean's acidification.

In India, approximately 200 sea cucumber species are found, all of which are protected under the Wildlife (Protection) Act, 1972 against collection, trade or any form of utilisation. Two species of sea cucumber found in Indian waters - Holothuria fuscogilva and H. nobilis are also listed in Appendix II of the Convention on International Trade in Endangered Species of Wild Fauna and Flora (CITES) since 2020, which regulates their international trade.

"Despite the strict legal provisions, the Holothurian populations in India have been subjected to illegal harvest. TRAFFIC and WWF-India's study indicates an ongoing trend in illicit sea cucumber trade from India to neighbouring countries. With limited information about its population status, the trade could have a detrimental impact on the species' future," adds Dr Merwyn Fernandes, Coordinator, TRAFFIC's India Office and author of the report.

TRAFFIC and WWF-India's study – In Deep Waters: India's sea cucumbers in illegal wildlife trade - found that maximum seizures (139) were reported from Tamil Nadu, followed by 15 seizures in Lakshadweep, four in Andaman and Nicobar Islands, two in Karnataka, and one each in Manipur and Kerala, while one seizure occurred mid-sea.

To understand the sea cucumber trafficking from collection to transport, surveys were conducted at the three sea cucumber-rich areas, such as the Union Territory of Andaman and the Nicobar Islands, Lakshadweep, and the coastal state of Tamil Nadu. From the survey, hand-picking and skin/free diving were reported as the main ways for sea cucumber collection in Andaman and Nicobar Islands and Lakshadweep, while in Tamil Nadu mechanised boats were the primary method used to collect sea cucumber. In the Andamans, preservation was done by cleaning, cutting, and drying while in Lakshadweep it was done through salting. In Tamil Nadu, fresh sea cucumbers (i.e., sea cucumbers kept alive in seawater) and drying as a preservation method were preferred. Such information is useful in improving enforcement agencies' detection of illegal trade of sea cucumbers.

For more information or queries, please contact Dilpreet B. Chhabra at dilpreet.chhabra@traffic.org or call her at +91 9899000472. You can also speak to Dr Merwyn Fernandes, Coordinator, TRAFFIC's India Office and also the author of the study at +91 9820347492 or write to him at merwyn.fernandes@traffic.org

NOTES:
World Fisheries Day is celebrated on 21 November every year and is dedicated to highlighting the critical importance of healthy ocean ecosystems and the need to ensure sustainable fisheries stocks. The Day also explores finding solutions to the increasingly interconnected problems related to fisheries and ocean ecosystems.
Like this article?