The return of tigers to Kopijhola, Madhya Pradesh, India 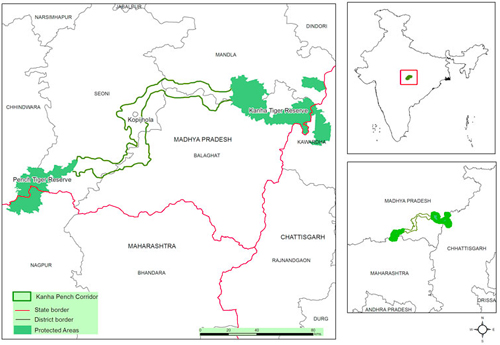 Location of Kopijhola in the Kanha-Pench Corridor

The Kopijhola forest block under the South Seoni Forest Division, covering an area of about 182 sq. km., is an important consitituent of the Kanha-Pench corridor in Central India. This corridor offers crucial connectivity between the two important tiger source populations in the Kanha and Pench Tiger Reserves. Corridors such as these help in the dispersal of tiger popluations from source sites and thereby help in increasing genetic diversity among the populations favouring long term survival of the species.

Prevention of timber extraction
In 2010, while undertaking tiger monitoring in the Kanha-Pench corridor, a WWF-India team came across indiscriminate felling by the Madhya Pradesh State Forest Corporation (commercial wing of the state forest department) in the Kopijhola forest block, an area that is reported to have a tiger presence previously. Later, upon learning that the Kopijhola forest block as a whole was proposed to be handed over to the Corporation to start commercial logging operations the team undertook a rapid survey of the Kopijhola forest block to assess its biodiversity. The results of the survey, which advocated a complete ban on further timber extraction, were submitted as a report to the Madhya Pradesh state Forest Department in early 2011. Based on the report, the Forest Department stopped further felling and the proposed handover was stopped as well. 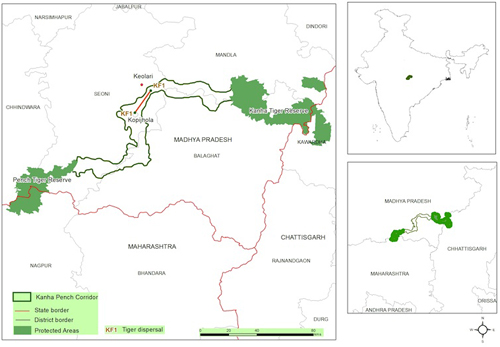 The tigress, which was camera trapped on a cattle kill, was confirmed from its stripe patterns by the field team to be the same individual that was previously active in the Keolari area of the Kanha-Pench corridor where it had been photo trapped on three occasions. The capture of the same tigress on camera traps in the Kopijhola forest block indicate that she moved around 18 kilometres from Keolari. This signals that the corridor is functional and is aiding in the disperal of tigers. In addition, repeated captures of the same tigress from the area over the past one year seem to signify that the area is not just used for disperal but might also be the territory of the tigress.

Monitoring of cattle kills
Though several cattle kills were made by the same tigress and other tigers while dispersing through the corridor forests, not a single case of retaliatory poisoning of the kills has been reported in the past one year from this area. In all likelihood the implementation of Interim Relief Scheme by WWF-India in this area has helped in this. A total of 131 people have been paid compensentation through this scheme in the last one year.

For past one and half years, WWF-India has been monitoring cattle kills in the Kanha-Pench corridor through camera trapping. Data from the camera trap captures are used in providing interim relief for cattle killed by large carnivores to reduce retaliatory poisoning of tigers and leopards. Not only has this been effective in reducing the initial anger of the local communities but also the monitoring exercise has been an effective tool for collecting ecological information on large carnivore assemblage, dispersal and movement in the Kanha-Pench corridor.

Taken together, these interventions confirm what has been proven in the past that whenever potential habitats are left undisturbed and local communities are quickly compensated for any loss they suffer, tigers have better probability to thrive.