More rhinos for Manas: The National Park gets two rhinos from Kaziranga 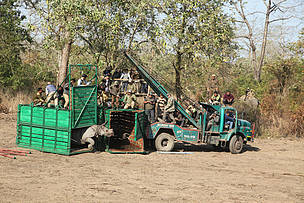 Rhino release: Manas
© IRV2020/Subhamay Bhattacharyya
New Delhi: Two female sub-adult greater one-horned or Indian rhinoceros’ (Rhinoceros unicornis) were successfully translocated from Kaziranga National Park to their new home in Manas National Park in Assam, under the aegis of the Indian Rhino Vision 2020 (IRV 2020) programme. This translocation marks an important milestone for IRV 2020, an initiative led by Government of Assam, in association with several other partners including the Assam Forest Department, WWF India, WTI, Aaranyak and the International Rhino Foundation (IRF), the US Fish,and Wildlife Service with support from the Bodoland Territorial Council, and local communities.

The translocation of rhinos is an important conservation measure in helping conserve the species. Translocating individuals from one area to another helps maintain genetic variability to an existing population. It also helps strengthen habitats, expand their distribution and reduce risk of disease, and in-breeding.

The two-day translocation was the culmination of a year of preparation by the Rhino Task Force formed as part of IRV2020. The rhinos were translocated from the Bagori range of Kaziranga National Park under the careful supervision of experienced veterinarians and rhino experts who monitored their health throughout the process. The two rhinos were transported to the release site at Bansbari range, Manas National Park under strict security.

Speaking on the significance of the rhino translocation, Dr. Dipankar Ghose, Director of WWF India’s Wildlife and Habitats programme said, “The re-introduction of rhinos to Manas National Park is significant for establishing a viable population of this species in an additional Protected Area. As rhinos are indicators of healthy grassland ecosystems, a viable population in Manas National Park would mean a good habitat that would benefit other wildlife species.”

The translocation was coordinated by an experienced team of over 100 personnel from the Assam Forest Department, WWF India, International Rhino Foundation (IRF), College of Veterinary Sciences, district administration, Assam Police, Bodoland Territorial Council, Aaranyak, WTI, and other civil society partners. The two rhinos are being monitored closely by Assam Forest Department and WWF India personnel. The monitoring will continue for the next few months to ensure the safety of the translocated individuals. 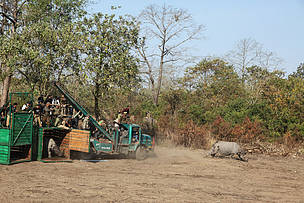