The road to tiger recovery in Rajaji 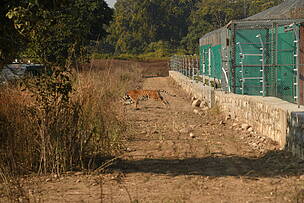 The western part of the Tiger Reserve provides a tremendous opportunity to recover the tiger population, given that wild ungulates occur at high densities. Scientific modelling has indicated that with sustained recovery efforts involving habitat restoration, strengthened monitoring and patrolling, effective community engagement, and corridor management supported with translocation of a carefully selected breeding population of tigers, the western part of Rajaji TR and its surrounding forests could hold over 30 tigers. The plan is to translocate five adult tigers initially. The animals will be fitted with radio-collars and regularly monitored. This will help managers and conservationists to gain a better understanding of the range, territorial dynamics, ecology, and predatory behaviour of these individuals.

Prior to the translocations, tigers occupied 17 percent of the habitat in the western part of the Rajaji Tiger Reserve, with photographic evidence suggesting the presence of just two females and no signs of breeding since 2006. Translocation of tigers was therefore considered a necessary step towards species recovery. Long term success will also require other actions such as restoring connectivity with eastern Rajaji via functional corridors, increasing protection, and having conflict management mechanisms in place.

Over the past decade, WWF India has played a pivotal role and worked closely with the Uttarakhand Forest Department, Wildlife Institute of India and National TIger Conservation Authority in creating enabling conditions for tiger recovery, including the translocation of tigers into the Rajaji Tiger Reserve. Key measures undertaken by WWF India include strategic support to strengthen protection within Rajaji and in surrounding areas, training field staff of the Uttarakhand Forest Department in radio-telemetry based monitoring, engagement with local communities through solutions to manage human-wildlife conflict and meet their energy needs, and sustained support for restoring connectivity in key wildlife corridors.

WWF India’s Terai Arc Landscape team which has also been involved in monitoring tigers in the Corbett Tiger Reserve played a key role in assisting efforts to identify and capture individuals from Corbett for translocation to the Rajaji Tiger Reserve. In addition to supporting the translocation exercise with radio-collars and providing additional ground staff to carry out monitoring round-the-clock, WWF India’s team of conservationists remains actively engaged to support tiger recovery over the long-term in the Rajaji Tiger Reserve.

Undoubtedly, this translocation heralds new hope for tiger conservation in the Terai Arc Landscape. The efforts of officials, conservationists, and the staff involved in the translocation of tigers and subsequent monitoring and protection will bear fruit when a viable tiger population persists in western Rajaji.

Shri J. S. Suhag. Chief Wildlife Warden, Uttarakhand: “Long awaited translocation mission has taken shape in form of one male and one female tiger in Western area of Rajaji Tiger Reserve. The support and team effort of WWF, WII and NTCA has made it possible to achieve this. This will enable to enrich not only tiger population, but also will contribute to the attraction of wildlife tourist.”

Dr. Dipankar Ghose, Director, Wildlife and Habitats, WWF India: "This landmark translocation to recover tigers in the western part of Rajaji has been possible due to the collaboration with the Uttarakhand Forest Department, Wildlife Institute of India and National Tiger Conservation Authority and decisive action on the part of the government. WWF India will continue its work in and around Rajaji along with the stakeholders including local communities to ensure restoring connectivity in this part of the landscape and help secure the survival of wild tigers, their prey and habitats."