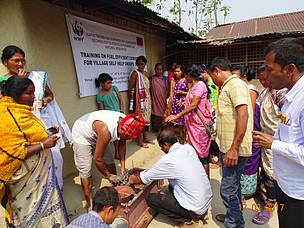 Communities being trained to make the fuel efficient SARALA chulla
© WWF-India
“I have to walk to the nearby hills for almost 3-4 km to collect fuelwood to support my family of five.  The climb is very tiresome, and also consumes a lot of my time since I have to go to the hills almost thrice a week”, says Mina Timungpi from Boche Self-Help Group (SHG) of Longkoi Tisso village in Karbi Anglong.

Mina Timungpi is one of many such individuals living in and around the Karbi Anglong hills who are highly dependent on the adjoining forests for fulfilling their basic necessities. With almost 65 % of the Karbi Anglong area coming under dense tropical forests, the area is a reservoir for renewable energy resources. The demand for fuel wood from these forests for various household consumptions is also fairly large. WWF India works with the local communities in the Kaziranga-Karbi Anglong Landscape to promote sustainable livelihood options and alternate energy measures, and thereby conserve the rich wildlife habitat of the region.

The Karbi Anglong hills are also connected to the famous Kaziranga National Park by four vital wildlife corridors i.e. Amguri, Kanchanjuri, Haldhibari and Panbari, which are extensively used by the wildlife present in the area. To ensure long-term wildlife conservation in the region, securing this rich habitat is very critical.

With an aim to reduce the communities’ fuel wood usage, WWF India has imparted trainings on making fuel efficient cook stoves for communities residing under the Karbi Anglong East Division. WWF India selected 16 SHGs residing in the fringe of Kanchanjuri, Haldhibari and Panbari corridors which connects Kaziranga NP with the forested areas of Karbi Anglong for the trainings. Three more SHGs from Sonitpur district have also been selected from the North Bank landscape in Assam.

Recently, three training workshops were organized by WWF India on making ‘Fuel Efficient Stoves’ in the region. The series of workshops were conducted from 17th to 19th March 2017 covering the villages of Engley Pathar, Longkoi Tisso and Jamindar Terang in Karbi Anglong.  A total of 145 individuals including women and local youth from 16 SHGs were trained under the programme. They were trained on making fuel efficient SARALA stove using a mud cast and another fuel efficient stove i.e. Pyro Mini Chimney was demonstrated during the training. Discussions were also held with the participants for their feedback on usefulness of the chulla, and suggestions, if any, for changes in design to customize it as per their need.

Following the discussion and feedback sessions, certain suggested modifications in the design of the chulla will be incorporated by WWF India. “For significant reduction in overall firewood consumption, there is a need to look into firewood usage for other household requirements”, says Dr. Pijush Dutta from WWF India. He also suggests that there is a need to develop improvised heating devices for activities such as preparation of local brew and pig feed since these activities also consume considerable amount of firewood. WWF India has also undertaken surveys to study fuel wood requirement for other household activities, and commercial demand of resources specially bamboo from the forests of Karbi Anglong.

Waiting for a new beginning, Mina Timungpi says “I look forward to the new chullas. It will consume less fuel and save a lot of my time. It will also emit less smoke”. 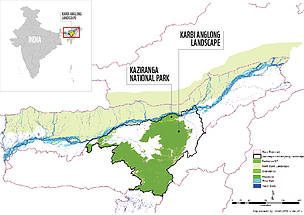 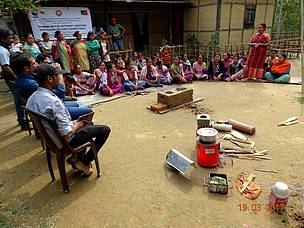 A feedback and discussion session in progress
© WWF-India Enlarge