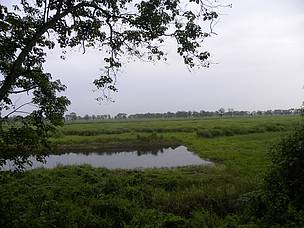 In an effort to raise awareness on local conservation issues related to the Rajiv Gandhi Orang National Park, a five-day cricket tournament was organized by the Youth Development Society and Anchalik Sports Association of Silbori. The tournament was held between the 14thand 18th of June 2014, at the All Muslim Student Union at Silbori Bazar playground with active support from WWF-India and the R.G. Orang National Park authorities.

A total of 24 teams participated in the tournament, comprising participants from communities living along the fringe areas of R.G. Orang National Park itself. The matches followed a limited overs format with each innings consisting of 16 overs.

Prior to the start of each game, opposing teams undertook a pledge to save the rhino, the state animal of Assam, with its prime habitat located within the R.G. Orang National Park boundaries. After some exciting matches, the two finalists –‘Nepali Bazar Cricket Team’ and ‘Prince 11 Club, Silibori’ faced off in the presence of over 1000 spectators, who had come to witness the finals.After a standout performance, the Prince 11 Club was victorious by a margin of 25 runs. The team was awarded the ‘Wildlife Conservation Champion Trophy’, which was donated by WWF-India and presented to the winning team by Mr. Deba Kumar Dutta, Senior Project Officer, North Bank Landscape, WWF India. At the closing ceremony, Mr. Dutta discussed the importance of conservation, with an emphasis on initiatives for the greater one-horned rhino, and the Indian Rhino Vision 2020 project.


The winning captain of the Prince 11 Club, Abul Bashar, shared his jubilation over his team’s victory, and expressed his excitement at being able to participate and secure a win in this unique wildlife conservation themed tournament, which had opened his eyes to several conservation issues that he was previously unaware of.

Mr. Jillul Haque, Secretary of Youth Development Society who helped significantly to overcome the initial difficulties in organizing the tournament added, “I had to facedifficulties to bring different sections of society together for conservation awareness, but through this cricket tournament, it became easier to gain the attention of more people. Before the start of every game, we also managed to inform all the villagers present at the ground, about the protection of rhino, tiger, elephant and otherwildlife of R.G Orang National Park. I thank WWF-India for its active support”.

WWF-India will continue to engage local communities so that long term for support can be built for conservation. 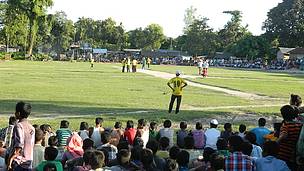