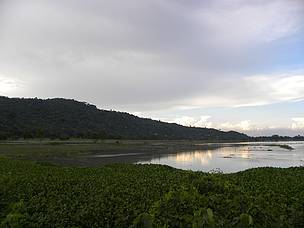 The Pobitora Wildlife Sanctuary is situated in the Morigaon District of Assam and covers an area of approximately 38.8km2, replete with a population of 100 rhinoceros’ as per a census conducted in 2012.It has the highest density of rhino population in the world.Pobitora was declared to be a reserved forest in 1971 and a wildlife sanctuary in 1987.

The purpose of the Summer Orientation Camp was to help generate an interest and to popularize science, mathematics, environmental science and wildlife among the students, who attended the programme. The camp was attended by a total of 109 students from seven fringe schools of the Pobitora Wildlife Sanctuary.
“We have been arranging community awareness programmes at the Pobitora Wildlife Sanctuary since the inception of Indian Rhino Vision 2020 programmes in 2005. This is the third student based awareness program in the current year. The local community has a very close affinity with the rhinos of Pobitora and so we have been trying to capitalize on this spirit to influence younger generations”, said MrDeba Kumar Dutta, Senior Project Officer,WWF- India.

In the remote area of Mayong Revenue Block, it is common for students to opt out of studying science and mathematics, thereby resulting in a lower level of awareness in these and other related fields such as wildlife science and the environment. These prevailing conditions have encouragedMayongAnchalik Students Union to help change the status quo and urge future generations of students to consider taking an interest in these fields, which hasformed the basis for the arrangement of the summer orientation camp.
During its course, the programme’s activities were scheduled between 10am and 2pm. The first two hours of the programmeconsisted of simple science and mathematics practical examples, followed by, two hours dedicated to instances related to environmental science and increasing wildlife knowledge. WWF-India arranged several speakers for wildlife related talks as well as screenings of short films for students including four WWF-Wildlife Jungle Gang Series Films and two local Assamese language documentaries on wildlife. This was followed by an interactivesession, which went on for the remaining duration of the programme.

The speakers from WWF-India included Mr Deba Kumar Dutta and Dr Jimmy Borah, who delivered talks on the greater one-horned rhino and the tiger respectively, as well as their conservation initiatives, including the Indian Rhino Vision 2020 Programme. Mr Nipen Kalita from the Pobitora Conservation Society delivered a talk on birds, Mr JugalBharali, an environment activist and photographer delivered a talk on the impact of the environment onour surroundings, Mr NabajyotiNath,and Mr BikashThakuria, Assistant Teachers and Mr Hari Prasad Moullik, a Journalist delivered talks on science and mathematics. The entire programme was coordinated by, Mr Champak Deka from Ecotourism Development Society of the Pobitora Wildlife Sanctuary.
“We learned several interesting facts about the Greater One Horned Rhinoceros, Tiger and Environment. The helpful tips to solve mathematics, and science problems were enjoyable and will greatly help us in our present education, and perhaps the rest of our lives as well”, said NabyajyotiSaikia, a class 9 student at Madhya Mayong High School.

On the last day of the programme students participated in open discussions with all the speakers and distinguished guests. Three students recited poems that they had composed for the conservation of Pobitora Wildlife Sanctuary. The programme culminated with felicitations to all guests and the prizes awarded to the top four students who performed exceptionally.

"It was great interacting with the students of the Mayong government school. Most of them have been brought up near Pobitora WLS, and already have the conservation of wildlife instilled in them. We simply took a small step of orienting them towards a more positive direction of wildlife conservation through this programme”, said Dr Jimmy Borah, Senior Coordinator - Tiger Conservation Programme,WWF-India. 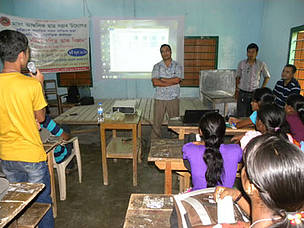 Mr Jugal Bharali, a wildlife photographer and environment activist interacting with students on “the environment and its impact “
© Munin Gogoi/ WWF-India Enlarge 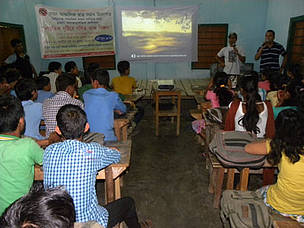 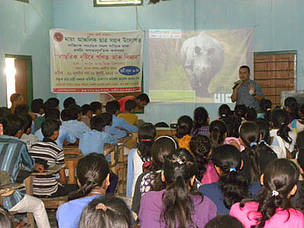