Workshop to Orient Media Representatives to Wildlife Laws in Kaziranga and Golaghat, Assam 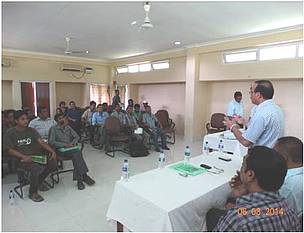 Mr N. Mahanta, DFO, Kaziranga NP (right) during his inaugural address
© Jayanta Deka/ WWF-India
Sensitizing the media and harnessing its strong influence can go a long way in the creation of public awareness. The media can play an instrumental role in conservation – from shaping public opinions to generating positive support for conservation initiatives and their importance, to investigative journalism that assists law enforcement agencies in convicting criminals who participate in illegal wildlife trade and poaching.

In view of this, on 6 August 2014, WWF-India organized its first-ever legal orientation workshop for media representatives at the Kaziranga National Park Centenary Convention Centre, Kohora. The event was a follow up on learnings from a 10-day exposure visit in April 2014. The exposure visit was organized by WWF-India for the local media from Kaziranga Tiger Reserve (KTR) area in Kaziranga-Karbi Anglong Landscape (KKL) to Corbett Tiger Reserve (CTR) and Rajaji NP in Terai Arc Landscape (TAL). The visit was for the media to get a firsthand experience of the various kinds of conservation work being done in the area. During this visit, they also engaged with the local communities residing on the fringes of these areas about their involvement in the overall conservation efforts in the region. The media team also interacted with the local media representatives from Corbett area and shared views regarding their role in highlighting conservation issues and working as a watchdog for wildlife-related issues.

The participating media team also met with senior personnel at the Secretariat of WWF-India in New Delhi and several other WWF-India officials. During these meetings, it became apparent that a legal orientation on wildlife and other forest-related laws was of particular importance to media representatives. This would significantly improve day-to-day reporting of local wildlife issues.

The orientation workshop at Kaziranga began with an address by Mr M.N. Duarah (CF - Kaziranga National Park) and Mr N. Mahanta (DFO - Kaziranga National Park), who each delivered an inaugural talk on the importance of legal knowledge for the media with respect to wildlife conservation. Dr Pranab Jyoti Bora welcomed all participants and described the objectives of the programme. Dr Anupam Sarmah (Head, Assam Landscapes, WWF-India) presented an overview on the two sessions of the workshop, with a brief introduction of the event’s speakers—Mr Saurabh Sharma (Advocate – Delhi High Court as well as a noted wildlife lawyer) and Ms Vishaish Uppal (Head - Sustainable Livelihoods & Governance, WWF-India)

The first session by Mr Saurabh Sharma highlighted several fundamental points on wildlife laws, animals protected by these laws, animals in wildlife trade and how crimes against these animals are dealt with. Mr Sharma also detailed the essential role local media can play, particularly in relation to procedural issues related to photographic evidence and valuation of seized articles during an investigation, and other such processes.

Ms Vishaish Uppal spoke in the second session on various legal provisions for conservation, detailing the salient features of the country’s numerous forest/wildlife/biodiversity and other related Acts. Ms Uppal also detailed the need for community involvement in meeting various conservation and biodiversity challenges, and discussed several provisions wherein communities had the right to protect, regenerate or conserve or manage any community forest resource, which have been traditionally protected and conserved for sustainable use.

"The media can play a crucial role in ensuring that correct and complete information enters the public domain, which can help in the right decisions for ensuring conservation and human well being. Media today can use the relevant communication technologies to bring people together to protect our wildlife and threatened habitats,” said Ms Vishaish Uppal, WWF-India.

Additionally, participants were also provided further details specific to KTR, and community rights. Mr N. Mahanta (DFO) and Mr R. Sharma (Research officer) of the Kaziranga National Park played an important role, in the first and second session respectively by discussing these subjects in a local context for the benefit of the participants.

The sessions saw a high degree of interaction and participation from the attendees, which was both positive and welcome. The workshop was attended by media personnel from the Bokaghat sub-division of Golaghat, Kaliabor sub-division of Nagaon, Dhekiajuli of Sonitpur district and members of two local NGOs from Kaziranga and Jorhat. Mr M.N. Duarah (CF), Mr N. Mahanta (DFO), Mr R. Sharma (Research Officer) and Mr M. Tamuly (Range Officer - Central Range Kohora) of the Kaziranga National Park were also present.

The workshop was also attended by members of the Naturalist for Rehabilitation of Snakes and Birds (NRSB), an NGO based at Kaziranga. The sessions provided valuable information concerning the legal aspects that govern the rescue and rehabilitation of snakes, birds and other wildlife. A representative from the Humane Society of Assam, a newly formed NGO at Jorhat was also present at the workshop.

A participant feedback session was conducted by Mr Soumen Dey, Mr Tridip Sharma and Mr Sarkam Rongphar of WWF-India after the second session. The workshop ended with vote of thanks by Dr Anupam Sarmah of WWF-India. Mr Sarkam Rongphar, Mr Jayanta Deka, Mr Abdul Sadak and Mr Munin Gogoi of WWF-India assisted during registration of the participants and meeting hall arrangement of the workshop. Dr Joydeep Bose (Senior Manager, Species and Landscapes Division WWF-India) coordinated all the official arrangements from the WWF-India secretariat.

"As media are very sensitive around KTR as well as Assam on wildlife issues, this workshop would help the local media personnel during their day to day reporting on wildlife related issues which will influence the society towards wildlife conservation,” said Mr Pranab Jyoti Bora. 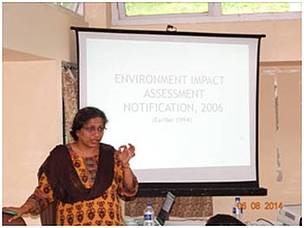 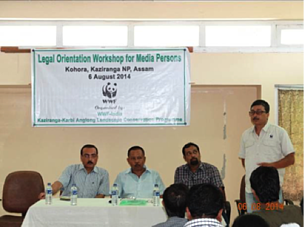 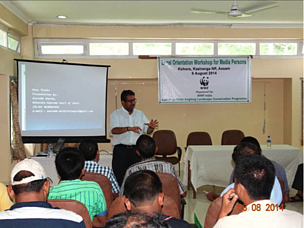 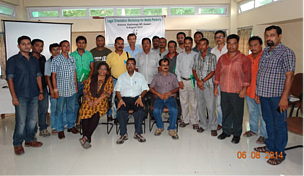