“A Day with the Rhinos” 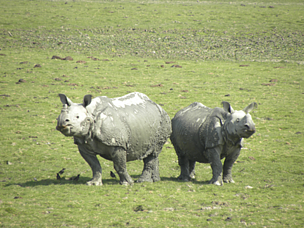 ‘The rhino is the soul and identity of Assam. Each rhino poached, hurts the soul of this state’.

The greater one-horned rhinoceros (Rhinoceros unicornis) once existed across the entire northern part of the Indian subcontinent. In recent decades, their numbers have declined sharply. Today, the wild population of this species numbers approximately 3,270 and is found in pockets in north India and Nepal. Almost 75 per cent of the world’s population exists in Assam, of which 70 per cent is found in Kaziranga National Park itself.
Habitat loss and threat of being poached for their horns, has made the conservation of the greater one-horned rhinoceros an important goal for the wildlife community. Several conservation initiatives have been promoted by wildlife NGOs in India including WWF. These aim to involve local communities with the broader conservation goals and objectives for safeguarding rhino populations. Thus, several campaigns have been initiated, such as celebrating a World Rhino Day.

World Rhino Day was announced by WWF-South Africa in 2010. Following its first celebration, the event grew into an international success. It was initiated due to the efforts of two dedicated conservationists – Lisa Jane Campbell from the Chishakwe Ranch in Zimbabwe and Rhishja Cota-Larson from Saving Rhinos in the USA. Together, they found they shared the common goal of inventing the idea of World Rhino Day, as a unified celebration of all species of rhino. World Rhino Day since then has become a global phenomenon which unites NGOs, zoos, cause-related organizations, businesses and concerned individuals from every corner of the world.

This year, WWF-India participated in the celebration through a programme entitled “One Special Day with the Rhino”. An awareness programme was arranged at Sankardev High School, Boha with active support from Pobitora Eco Development Society, Mayong and the park authority at Pobitora Wildlife Sanctuary (WLS).

Approximately, 175 students attended the event from Sankardev High School and Salani Boha Dolani M.E. School. The programme featured elaborate descriptions of different rhino species of the world as well as their conservation importance. It explained the goals and objectives of the Indian Rhino Vision 2020 programme, which is to take the population of wild rhinos to 3,000 in seven Protected Areas of Assam by 2020. Mr Deba Kumar Dutta, from WWF-India, made an audio-video presentation on rhino conservation. An on-the-spot rhino conservation slogan competition was arranged among the students. Out of 100 slogans from participating students, 13 were selected to represent the spirit of rhino conservation. In the end, an open ‘rhino quiz’ competition was arranged, which was, conducted by Mr Champak Deka from Pobitora Eco Development Society. The programme was concluded with the viewing of a Jungle Gang Series Rhino Film.

“The park authorities are always grateful to the fringe community for their immense contribution in rhino conservation. Without the support of local communities, the Pobitora Park Authority could never effectively protect the world’s densest rhino population and its habitat. All students and teachers are requested to contribute their efforts towards the long-term conservation of Pobitora’s rhinos”, said Mr Das.
“This is the first rhino awareness meeting I have ever attended. I believe this will, influence our teachers as well as students to help conserve our wildlife better and we all hope to attend more such events in the future”, said Rinki Medhi, Assistant Teacher, Sankardev High School, Boha.

“This is the fourth consecutive awareness programme we organized around Pobitora Wildlife Sanctuary. We have covered all corners of Pobitora WLS. This particular place is comparatively remote but immensely crucial for the protection of Pobitora WLS. We hope our limited awareness efforts will have a significant and positive impact among the new generation and local communities of Pobitora WLS”, said Deba Kumar Dutta, WWF-India. 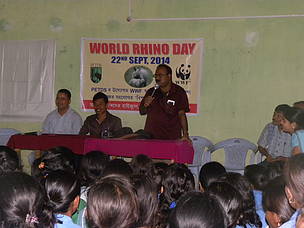 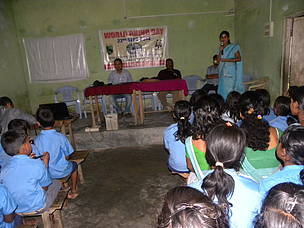 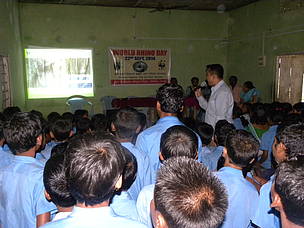