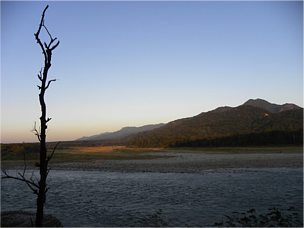 A heart warming story about a rhino – Udangshri and her calf, which fills all wildlife conservationists and enthusiasts with joy, sadness and ultimately hope for a better tomorrow.

On 26 September 2012, a female rhino named Udangshri, which means “a free minded spirit”, gave birth to her calf at Bhuyanpara Range in Manas National Park (NP), Assam. Udangshri, also known as Rhino-10, had been relocated just a year earlier from the Pobitora Wildlife Sanctuary (WLS) to Manas, under the Indian Rhino Vision (IRV)2020 programme. This year, her calf, turned two!

Rhino-10, after her release at Manas National Park,was frequently seen in the company of a translocated male rhino- Rhino-5 in the Bhuyanpara range of Manas National Park. Monitoring her whereabouts post-September 2012became increasingly difficult for the forest staff, as she began to use the inaccessible and interior areas more frequently.

A special search operation to locate her was undertaken by two teams equipped with telemetry receiver antennae, GPS devices and cameras. The teams were divided up to scan two different probable areas - one starting from the Bhuyanpara Range Office (BRO) and the second from Betbari camp. Using a triangulation technique, team members, Mr Dhanonjoy Daimary and Mr Bimal Basumatary surveyed the area from an elevated vantage point and found Rhino-10 standing at a short distance from their position. They were very excited to observe - what seemed to be a rhino calf in between her forelegs but were unable to confirm the sighting due to dense vegetation. Later, the team confirmed the presence of two sets of footprints – one pair distinctly smaller than the other. The search operation was however postponed until the next day due to the loss of daylight and inclement weather. The next morning a confirmation mission began and the precise birthing location was also found. The team soon enough, located the mother with her calf inside dense grasslands and the mother was observed to be very protective of her newborn, always keeping it sheltered.

The birth of a newborn rhino calf to a translocated rhino ushered a new ray of hope in the process of revival of Manas National Park and the overarching goal of conservation of the greater one-horned rhino under the IRV2020 programme. The birth was a symbolic event and a great source of motivation for all stakeholders involved with rhino conservation.

Unfortunately, the joy was short-lived and the enormous challenges to rhino conservation once again came to the fore when a gang of poachers killed Udangshri on October 29, 2013, a year and 33 days after she gave birth. After the loss of its mother, the calf would wander aimlessly in the area. However, shewas recently adopted by Rhino-5, who was seen keeping it company.

“We have been worried about the rhino calf and we did have some very anxious moments after the mother was poached”, said Sonali Ghosh, Deputy Field Director of Manas Tiger Park. “Initially, we were unsure whether the calf needed to be brought under captive care. Staff patrolling using elephants and camping parties at Chengmari ensured that the calf was tracked on a regular basis. It was heartening to note that the calf was also taken under the watchful 'care' of another adult – Rhino-5 and that it took to an independent life in the wild. There are a lot of challenges on protection mechanisms under Manas National Park, however, this is gradually improving,” she said.

Dr Sonali Ghosh and Dr K.K. Sharma, Team Leader of the IRV2020 veterinary programme recommended tracking the calf on a regular basis and ensured protection across the ranging area of the calf. A WWF-India team member at Manas NP is always a part of the monitoring process.

At present, the rhino calf is approximately three feet tall and in good health as it turns two years old. The Manas National Park staff along with WWF-India’s team in the area is committed to ensuring a safe future for calves such as this, as well as the entire rhino population, and celebrates its birthday as a symbolic occasion for a better tomorrow.

About IRV 2020 and the greater one-horned rhinoceros

The IRV2020 is a multi-partner programme where government departments are working together with the international organizations, local NGOs and the communities.The programme has been formulated during 2005-06 by the “Task Force for Translocation of Rhinos within Assam” constituted by the Government of Assam vide notification No. FRW.24 / 2005 / 15 dated 30 June 2005 incorporating conservationists from diverse backgrounds, the government as well as the non-governmental sector. The aim of the programme was to increase the rhino population by approximately 3000 in seven Protected Areas by the year 2020. The programme is primarily centred in Assam and is supported by WWF-India and other local organizations. 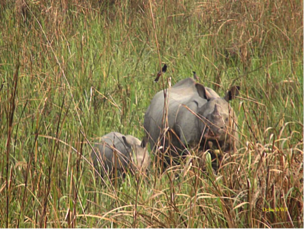 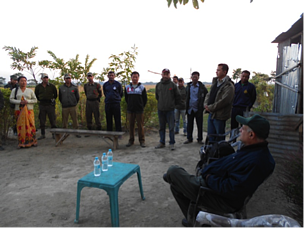 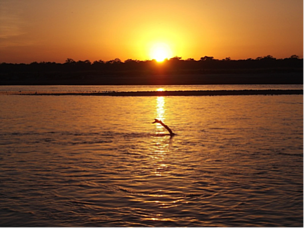 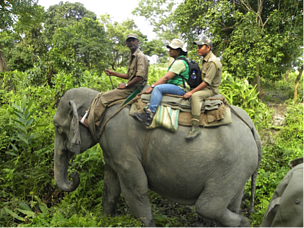 Dr Sonali Ghosh on her way with a few team members to assess the situation and location the rhino calf.
© Deba Kumar Dutta / WWF-India Enlarge