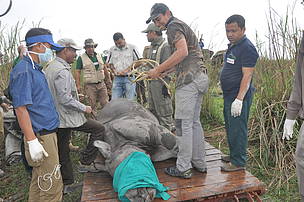 Two females rhinos captured in the Bagori Range of Kaziranga National Park being prepared for translocation to Burachapori WLS on 29 March 2016.
© WWF-India

After success in Manas, new chapter of rhino translocation sets off

Kaziranga National Park, Assam: An ambitious plan to expand the distribution of Assam’s state animal, the greater one-horned rhinoceros, took yet another big leap, with the translocation of two rhinos from the Kaziranga National Park to the Burachopari Wildlife Sanctuary on 29 March 2016.

This operation was part of the Indian Rhino Vision 2020 (IRV 2020) programme launched by the Assam Forest Department in partnership with WWF-India, the International Rhino Foundation and US Fish & Wildlife Service in 2005. The programme aims at increasing the number and range of rhinos in Assam through wild-to-wild translocations from Kaziranga National Park and Pobitora Wildlife Sanctuary to potential Protected Areas  including Manas National Park, Burachapori Wildlife Sanctuary, Laokhowa Wildlife Sanctuary, and Dibru-Saikhowa National Park.  The vision is to attain a population of 3000 wild rhinos in Assam, distributed over seven of its Protected Areas by 2020.

This second chapter of translocation to Burachapori comes after achieving substantial success in restoring the rhino population in Manas from zero in 2005 to more than 30 today.  Rhinos were common in the Burachapori complex till the 1980s, but were exterminated in the mid ’80s due to several factors including poaching and social unrest in the region. The park was declared a wildlife sanctuary in 1995.

The translocation operation to Burachapori began at 6 am on 29 March. According to a press note released by the Principal Chief Conservator of Forests (WL) and Chief Wildlife Warden of Assam Mr.O.P.Pandey, two female rhinos, an adult and a sub-adult, were captured in the Bagori Range of Kaziranga National Park in the early morning, following the standard protocols set for the IRV2020 programme. The pachyderms were transported to their new home, the Buracapori WLS, and were released in the specially constructed enclosure on the morning of 30 March 2016 in presence of the officials of the Assam State Forest Department, and representatives of WWF-India and International Rhino Foundation.

Since 2014, WWF-India has been working along with its partners to ensure that the Burachapori sanctuary is suitable, safe and well-protected to support the reintroduction. To this effect, a special task force was formed which made regular assessments of work in progress. A specially designed rhino holding enclosure – called ‘boma’ – has been constructed to ensure that the translocated rhinos receive highest protection in their new home.

The boma is spread over an area of about 150 hectares and has two main parts – an inner holding boma with a 5-layer security system, and an outer main boma surrounding the inner boma, with a 3-layer security system. The translocated rhinos were first released into the holding boma and would be gradually introduced to the main boma, once they settle down in the new location.

The rhinos have also been radio collared for post-release monitoring. WWF-India would like to thank all its partners, including the Assam Forest Department, the WWF network, the AREAS Program, the International Rhino Foundation and TATA Capital for supporting this initiative of brining back rhinos to Burachapori.

Two females rhinos captured in the Bagori Range of Kaziranga National Park being prepared for translocation to Burachapori WLS on 29 March 2016.
© WWF-India Enlarge 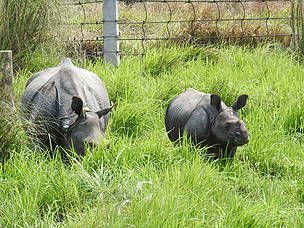 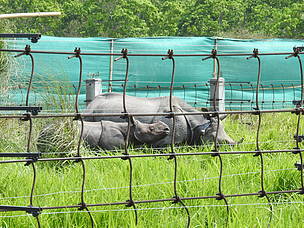 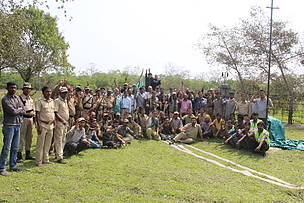