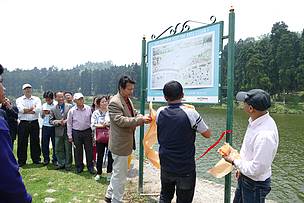 Inauguratation of sinages at Mirik on occasion of International Day for Biological Diversity 2017
© WWF-India
Gangtok/ Darjeeling: Programmes to mark International Biodiversity Day were organised in Sikkim and Darjeeling on 22nd May by WWF India in collaboration with Biodiversity Management Committee (BMC) and Zero Waste Himalayas.

Concurrent to the theme of Biodiversity and Sustainable Tourism students, local community members and officials of NGOs came together for the programmes at Mirik Gardens in Darjeeling. Mr. Gyalbo Lama, Chairman of Biodiversity Management Committee, Mirik inaugurated the programme and urged the participants to conserve the biodiversity of the region to promote tourism. Other dignitaries present in the programme included Mr. LB Dewan, Director of Friends for Trees Forum.Senior Programme Officer, Deependra Sunar gave a presentation on the importance of Mirik lake and the threats to its biodiversity due to anthropogenic pressures.A cleanliness campaign was also organised around the Mirik Gardens by the students.A poster exhibition for awareness generation on the flora and fauna of Mirik, medicinal plants, and birds of Darjeeling Hills and zero waste was also on display for the students and other participants.

While in Sikkim, the day was observed with a screening of the film “Pokchi-The Red Panda” in East Sikkim. The screening was organised by the WWF India team for students of various schools located along the fringe of Fambong Lho Wildlife Sanctuary in East Sikkim, 30 km from Gangtok. The short film that talks about the biodiversity of the region and the different habitats found in Sikkim was well received by all the students. The students were also informed on how a well-managed tourism sector can contribute significantly in reducing threats which could help in maintaining or increasing the key wildlife populations and biodiversity values through tourism revenue.

After the film, an open quiz was conducted for the students based on the information given on the film, and the winners were given away prizes like bookmarks, badges and Red Panda notebooks. The team traveled to 5 schools during the course of the event interacting with more than 400 students. This programme was organised in coordination with a women’s self help group from Pangthang in Sikkim. 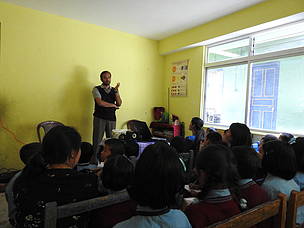