On the Trail of Ranthambhore’s Tigers 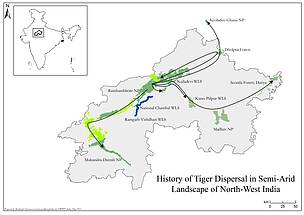 ‘Beyond the realms of Ranthambhore’, a status report on tiger and its prey in the wildlife habitats of Madhya Pradesh and Rajasthan, aims at enabling improved and precise conservation strategies

Sawai Madhopur, Rajasthan:  The Ranthambhore National Park, located in WWF-India’s Western India Tiger Landscape is the westernmost arid zone range for wild tigers in the world. Several human-dominated areas surrounding that National Park act as corridors for dispersing tigers and need to be secured to ensure the survival of the big cats in this region. This was the key observation revealed in a report ‘Beyond the realms of Ranthambhore’, released by WWF-India with support from the Government of Rajasthan in January 2016.

The report is an outcome of two years of extensive field surveys and camera trapping exercises conducted by WWF-India in association with the Rajasthan and Madhya Pradesh forest departments to understand tiger dispersal patterns and the presence of wild ungulates in the Western India Tiger Landscape. Based on the data and information collected during the course of this study, the report recommends strategic interventions with the stakeholders. It observes that in order to maintain a genetically-diverse population in this landscape, there is a critical need to allow safe dispersal of tigers by ensuring that corridors are functional.

The survey: What, why, when
Past records indicate that tigers once moved freely across the dry deciduous forests of Madhya Pradesh and Rajasthan. Today, only two forests accommodate tiger populations in this region – Sariska Tiger Reserve in Alwar district and Ranthambhore Tiger Reserve in Sawai Moadhopur, both in Rajasthan. These semi-arid forests are the driest habitat for tigers in the country and probably the world.

This study, initiated in 2013-14, is a status report on tigers and its prey in the Western India Tiger Landscape. The report envisions a greater objective -- of generating reliable information on the occurrence of tigers and their prey outside Ranthambhore to facilitate better conservation planning and wildlife management.

In a nutshell, the study observes a strong linkage between Ranthambhore National Park and KWLS, towards Kuno-Palpur WLS and Madhav NP in Madhya Pradesh, forming a “stepping stone” connectivity for tigers. It also reveals a linear corridor towards the south west that connected Ranthambhore to Ramgarh-Visdhari WLS in Bundi, and further ahead to Mukundra Hills in Kota. Reports of tiger dispersal from Ranthambhore, along the ridge top forest connectivity in the districts of Kota and Bundi were taken into account as well as those in the forested areas along the rivers Chambal, Kalisindh, Mez, Parbati, Kuno, Seep and Machali. The ravines also acted as corridors for dispersing tigers, it reveals.

Based on these observations the survey notes that corridor blocks outside PAs held considerable potential to harbor tigers, indicated by the presence of wild prey in the regions. However, most habitat blocks also faced immense pressures in the form of poaching, excessive livestock grazing, firewood and grass collection done by people living on the fringes and so on. This, and developmental pressures due to anticipated construction of roads and widening of existing roads, would severely fragment the region’s fragile corridors, it indicates.

Stakeholders involvement
Summing up, the report recommends actions for the states forest departments and other stakeholders to promote conservation of tigers in specific sites. The recommendations include policy inputs, suggestions for community involvement in conservation, habitat restoration and also for identifying important areas for future research and monitoring.

For this, key threats in each region were individually examined and categorized. It has emerged that the prime threat to almost all sites studied in the corridor came from specific anthropogenic pressures ranging from grazing pressure, illegal cutting and lopping of trees for fuel wood, poaching, flattening of ravines for agriculture, sand and stone mining, to name a few. Habitat degradation led to spread of invasive species like prosopis and lantana camara, and caused eutrophication of wetlands in several regions. Besides construction of roads, other development related pressures including stone and sand mining, road kills, etc, were also considerable, and need to be addressed through stakeholder involvement the report suggests. 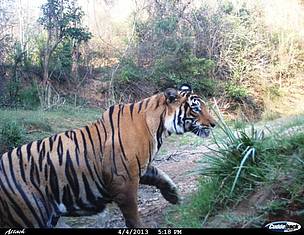 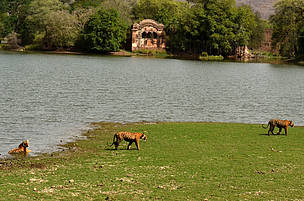 'Beyond the Realms of Ranthambhore', is an attempt to understand the status of the tiger and its prey in the wildlife habitats of Madhya Pradesh and Rajasthan
© Sunny Shah/WWF-India Enlarge 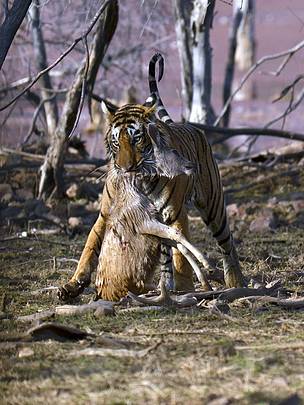