Near the forests of Sundarbans, a tiny hamlet gets a new lease of life

Mrs. Minoti Aulia explains the pond sand filter initiative
© WWF-India
The trip to Mrs. Minoti Aulia’s village in Sardar Para, Satjeliya Island, takes approximately three to four hours from the nearest town of Canning. The initial leg of the journey begins by bus or a motor vehical followed by a country boat, and subsequently, a rickshaw, plying over rugged terrain and narrow water creeks. The experience involves cruising through the tides and hopping from one island to another; as the islands in Sundarbans are isolated by water channels of the delta. In the monsoon season, the streets become even more difficult to commute as their brick and mud construction deteriorate within the islands.

On approaching Mrs.Aulia’s home, one is greeted by a courtyard facing a serene tin roofed mud house, which is surrounded by lush green vegetables growing in a kitchen garden. A chicken coop assembled from bamboo and hay lies just beyond the courtyard, alongside a fresh water pond that is home to a variety of fish.

The Sajnekhali Wildlife Sanctuary is located directly across the river a few meters alongside Mrs.Aulia’s courtyard.  This Sardar Para hamlet has a population of about 500 people in about 100 households. Historically, most of the households in this community were solely dependent on forest resources, and earned their livelihoods through the collection of fuelwood and honey, as well as fishing. In the last decade, however, the Satjeliya island community had found itself in a difficult set of circumstances, and had become one of the most marginalized fringe communities of the Indian Sundarbans.

On a typical morning, Mrs.Aulia begins her day at 5 AM by cleaning her courtyard and feeding her livestock and poultry. She then spends time collecting fuel in the form of habja and bhashan (dried fallen vegetation such as leaves, and dried floating biomass).  Occasionally, she also engages in fishing and completing various household chores. Times are different now from what they were before 2007, when she also had to make arrangements for clean drinking water.

Clean water to their doorstep

Before 2007, the Satjeliya island community faced an acute shortage of freshwater due to a steady increase in salinity intrusion in the region's surface and ground water. The only access to potable water existed in the form of a solitary manual-powered deep tube well in the neighbouring hamlet, as the village's own wells had become contaminated. The men of the village ventured into the forest, and thus the task of fetching potable water was left to the women of the village, who had to walk a considerable distance of two to three hours to the neighbouring hamlet, burdened with heavy water containers.

In response to these circumstances, a pond sand filter (PSF) initiative was conceived by WWF-India and the Swedish International Development Cooperation Agency (SIDA), which not only solved the drinking water issue but also allowed the women of the community to reclaim their capacity to contribute to the village's workforce. It was then that Mrs. Aulia envisioned that the community be brought together under one umbrella to form the Sardar Para Paniyajal Samiti. The creation of this society served as an effective vehicle for the community to collectively demand their rights from the local self-government.

Thanks to these efforts, the responsibility of collecting potable water no longer occupies Mrs.Aulia's time. During the latter half of the morning she engages herself in cooking for her daughter and husband, as they leave for school and work respectively. After lunch is prepared and the vegetables have been planted in the kitchen garden, most of her afternoon is spent by preparing dinner, cleaning chicken coops, and performing agricultural activities in the field.

Along with several of her fellow community members Mrs.Aulia, has, over the last few years, also managed to preserve two to three varieties of native salt tolerant paddy seeds, which she has been cultivating over the last few years – following in the footsteps of age-old traditional agro-ecological cultivation processes that enabled the growing of salt-tolerant seeds. These practices were historically carried out due to the region's susceptibility to the intrusion of saline water. In recent times, however, village residents had switched to a high yield variety of genetically-modified seeds which exhibited a tremendous decline in crop yield despite their generous consumption of fertilizers and pesticides.  WWF-India and eminent agricultural scientists initiated an effort to reintroduce the indigenous seeds back to the community's agricultural practices, to help them withstand periods of saline intrusion.

During the lean seasons, Mrs.Aulia spends a majority of her time in upland agricultural practices, and has been a strong advocate and proponent for these systems by spreading awareness among the communities on enhancing the resilience of agricultural crops and reducing vulnerabilities.

As the light fades with the approaching evening, this hamlet which was once dark and gloomy, now stirs with an air of warmth, owing to its newfound access to clean sources of energy -- a 24 hour charging power station that has been setup in the middle of the hamlet. The self-sustained Sardar Para Paniyajal Samiti has now formed a sub-committee Adibasi Gokul Chandra Bidyut Committee to manage the power station. Mrs.Aulia has yet another role today, as the secretary of this committee.

In 2011, with the support of the community, WWF-India and ABB installed a solar photovoltaic charging station in the middle of the hamlet based on projections calculated by the community, in order to provide clean and affordable energy services.

Every household was provided with a battery-powered energy access kit, which requires charging from the central charging station upon its depletion. The charging station has transformed the lives of a once struggling community, where in the past, children once studied under the dim light of an ominous hovering lantern, and cooking meals for dinner had to be completed before sunset.

Today, the village has found a new life after sunset, and households are abuzz with various activities owing to the existence of electrical power. The installation of solar street lights, with help from WWF-India and Aircel, have also lit up the village streets, leaving them bustling with activity after sunset. This has given a new lease of life to several local enterprises -- tea and snack stalls and quaint stores now stay open way after sun down. The lights have also brought a great sense of security to the village residents – human-wildlife conflict incidents as well as the average crime rate has seen a marked decrease.

When asked about what has changed through the years, Mrs.Aulia smilingly remarks, “These recent initiatives have brought light into our lives, literally. The contribution of solar power and clean water in our village has changed everything. Today every household in this hamlet has access to energy after dark and gone are those days we had to walk miles to brink potable water home.”

The relationship that WWF-India has built with Ms.Aulia over the past few years is representative of a classic conservation alliance at the grassroots level. This alliance is already improving the lives and livelihoods of this marginalized forest fringe community, reducing their dependence on the forest and thus decreasing human-wildlife conflicts. 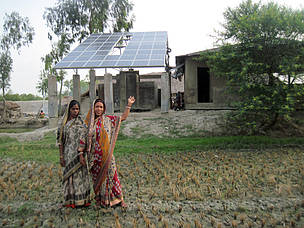