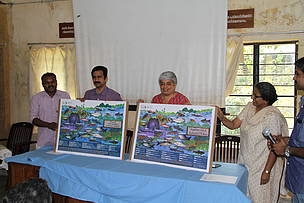 Vazhachal, Kerala: The Kadars and Malayans residing in Vazhachal forest area will observe a voluntary moratorium on fishing during the monsoon as a part of their Community Forest Resource (CFR) management plans. This was announced at a function to mark the release a poster on the ‘Important Fish of Vazhachal CFR area’ organised by Vazhachal CFR Coordination Sangham, Kerala Forest Department and WWF-India on 3 September 2015.

Speaking at the event, President of the Vazhachal CFR Coordination Sangham Mr.Unnikrishnan said that the self-imposed ban will stretch from fifteen days to a month during the monsoon and will help prevent disturbance and depletion during the breeding season and allow fish stocks to recover.

Dr. Worah said: “It is heartening to see how local communities, scientists, government representatives and civil society have joined hands to highlight the importance of conserving our rivers and riverine biodiversity. We hope that this can be a model across the country to garner more attention to the plight of our rivers and the people dependent on them.”

The nine settlements that have been granted the CFR title include Vazhachal, Pokalapara, Poringalkuthu, Mukkumpuzha, Wachumaram, Thavalakuzhipara, Anakkayam, Sholayar and Malakkapara. The CFR management initiative is a first step towards fulfilling the duties and responsibilities of CFR right holders outlined under Section 5 of the Scheduled Tribes and other Traditional Forest Dwellers (Recognition of Forest Rights) Act, 2006.

Emphasizing the responsibilities that come with the CFR rights, DFO N. Rajesh said: “The community has the responsibility of managing and protecting these forests. Along with the forest resource use in the CFR area, community can help Forest Department by providing appropriate support for better protection activities.”