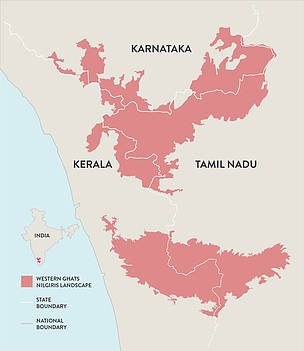 
“I planted bananas twice. But right before the harvest, elephants entered my farm. For seven consecutive days, they were destroying my crops. If there were a way to keep elephants away from our lands, I could have continued to farm. Now I have quit farming. I earn my living through manual labour”, said R. Vellaiyan, a farmer from Kodiyur village, Tamil Nadu.

Incidents of human-wildlife interface, since the past few years, have been rising in the country. In India, as per reports, over 400 people are killed annually due to encounters with elephants. Approximately 1 million hectares of crops are damaged, affecting around 500,000 families. On the other hand, almost 50 percent of the elephant deaths each year are due to retaliatory killings.

Presence of the pachyderm
India is home to more than 26,000 wild Asian elephants. The Western Ghats Nilgiris Landscape (WGNL) holds the largest contiguous elephant population in the country. The forests of Tamil Nadu and Kerala that fall under the Nilgiri Biosphere Reserve form a part of this landscape and are home to some of the rarest and endemic species of the country.

Spread of invasive plant species such as Lantana camara and Prosopis juliflora are also adversely affecting elephant habitat areas in WGNL. Increasing urbanization and poor land-use planning are added challenges that have led to an increase in human-elephant conflict in the region.

“Elephants usually raid crops at night, making it difficult for us to protect our agricultural land. We used various methods such as lighting fires and firecrackers, but all proved futile,” said Ravunni. Regular crop raiding incidents have left farmers like Ravunni, who is from the Kalankandi village of Kerala, in a constant state of terror.

Creating solutions for co-existence
Low cost fences
Over the years, WWF-India has adopted a range of methods to facilitate effective measures to manage human-elephant conflict (HEC) in the region. Developing site specific HEC management strategies, capacitating local communities and state forest departments, forming anti-depredation squads, and installing low cost power fences are some of the many initiatives that have been undertaken.

Electric and solar powered fences with low cost energizers are some of the initiatives that are helping communities in this landscape. These fences, which give elephants only a mild shock yet are powerful enough to keep them away from farms without causing them any harm, are installed following an open dialogue with the local communities. Many of these fences are maintained by the communities themselves. In Ravunni’s village of Kalankandi, an 800 meter (approx.) stretch of fence with solar powered energizer has been erected, which helps in deterring the elephants and other herbivores. About 35 families in the village are now reaping the benefit of the fence.

“Since the installation of the fence, there has been only one instance when an elephant breached the fence and entered the settlement in search of food”, says Ravunni. It is estimated that fencing will save crops valued at about INR 60,000 to 70,000 annually.

Early warning system (EWS)
Taking it a step further, in Tamil Nadu, the solar powered fence is complemented by a newly developed Early Warning System (EWS). A prototype consisting of one infrared motion sensor activates an alarm of roughly 10 seconds when it senses a large warm body in the vicinity.
Manikcam, a farmer from Vedar Colony, Coimbatore, Tamil Nadu adds, “Installation of the EWS, which complements the solar fence, has substantially brought down elephant raids. The EWS also ensures that we can sleep peacefully for most of the night, and only react when the system detects elephant presence in the vicinity.” In Coimbatore, Tamil Nadu, these passive infra-red (PIR)-based early warning systems have been set up in five places and trip-wire based EWS in 10 places; two PIR based EWS have also been placed in Gudalur and Kodagu in Tamil Nadu.

The way forward
WWF-India strongly believes that issues of human-wildlife conflict cannot be successfully managed without the support and involvement of the local communities. Given the pace with which elephants are losing their habitat due to rapid habitat degradation, land-use change and disruptions of corridors, individuals such as Ravunni and others play a crucial role in conservation.

WWF-India is working with the local communities for achieving social and financial sustainability in solar fencing solutions, through increased engagement before, during and after fencing. The organisation also aims to actively campaign against illegal and badly designed power fences that cause multiple elephant deaths every year in the region, by facilitating safe, well-designed and constructed fences.

“Community support is crucial to the successful management of human-elephant conflict. Fences are not a standalone option. We have to also encourage traditional watch-and-ward, as well as community protocols and arrangements for regular maintenance and contributions for upkeep of the barriers,” says D. Boominathan, Landscape Coordinator, WWF-India Western Ghats Nilgiris Landscape Programme. 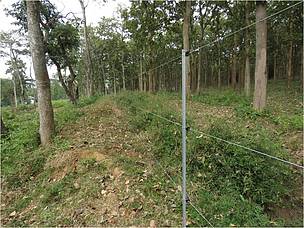 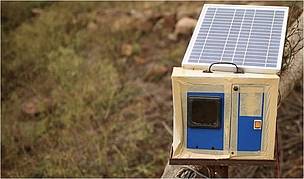