Help decide the future of Pangolins in India: #ChooseYourSide on the World Pangolin Day 2019 | WWF India

Help decide the future of Pangolins in India: #ChooseYourSide on the World Pangolin Day 2019 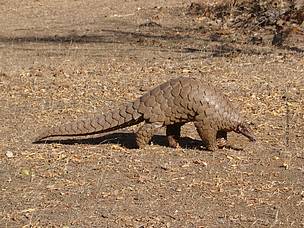 New Delhi: On the eve of #WorldPangolinDay 2019, TRAFFIC in collaboration with WWF-India, Wildlife Crime Control Bureau (WCCB) and the National Zoological Park (NZP), New Delhi urges all to help decide the future of pangolins in India by choosing their side – Pangolin in Wild or Pangolins in Illegal wildlife trade. This message has been displayed through an informative hoarding installed at NZP, New Delhi to mark the celebrations of the World Pangolin Day on 16 February 2019.

Last year, TRAFFIC’s study had found nearly 6000 pangolins in illegal wildlife trade in India during the period 2009–2017, closing to nearly 650 pangolins every year since 2009. However, this is a conservative estimate as only a fraction of illegal wildlife trade is detected, and actual numbers are likely to be higher. TRAFFIC’s study had also found the states of Manipur and Tamil Nadu as the hotspots for pangolin smuggling, based on the majority of seizures that took place.

Globally, pangolins are considered the most trafficked wild mammal and their meat is consumed as a delicacy and as a “tonic food” because of its unproven yet alleged medicinal properties. Pangolin scales are traded in huge quantities for use in traditional Chinese medicines. Most of the poaching and smuggling across pangolin’s range countries is targeted for international markets in China and Southeast Asia.

India is home to two species of pangolins- Indian Pangolins Manis crassicaudata and Chinese Pangolins Manis pentadactyla. Hunting and trade in both the pangolin species is banned under India’s Wildlife (Protection) Act, 1972 while international trade is prohibited under CITES (Convention on International Trade In Endangered Species of Wild Fauna and Flora). Despite this protection, the trade continues unabated threatening the future of species in the wild.

Dr Saket Badola, Head of TRAFFIC, India office said, “Improving an understanding about this elusive animal is important for curbing its illegal trade. Poaching and smuggling of pangolins and their body parts is driven by consumer demand and if buying can stop, supply of pangolins in illegal wildlife trade will cease to exist eventually. At TRAFFIC, we strongly believe in raising awareness and knowledge about species among consumers in order to garner their support for their conservation and protection. Therefore through this informative hoarding on pangolins we request people to rightly choose their side for Pangolins in the Wild”.
Ms Renu Singh, Director of NZP, New Delhi adds, “Zoo is an important place for students, youth and others to see wild animals and learn about them, and lakhs of visitors come to NZP, New Delhi every year.  Therefore, zoo becomes an important forum for increasing knowledge and understanding about wild animals and their threats. In light of this, we welcome this informative hoarding at NZP highlighting the threat to Pangolins on the World Pangolin Day 2019”.

Pangolins often called scaly anteaters are considered farmer’s friends as they help to keep a check on populations of ants and termites and help improve soil quality. Therefore, is it important that efforts are directed to stop poaching and smuggling of pangolins in India.