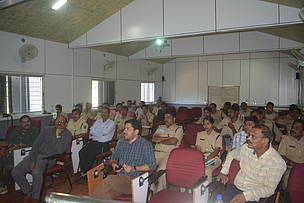 The training was attended by 38 officials from Karnataka Forest Department and followed similar trainings held in Uttarakhand and Assam.

Dr Saket Badola, Head, TRAFFIC India said, “Traffickers and criminal networks are exploiting e-commerce websites and social media platforms to trade in illicit wildlife products. It is vital to have a tech-savvy response to this new form of organised wildlife crime”.

“Karnataka is rich in wildlife, has a long coastline, and needs to be on high alert against all forms of poaching and the wildlife trafficking that extends to marine species, including sharks,” added Dr Badola.

Mr B. V. Patil, Director of Kali Tiger Reserve, said that the training workshop would help Kali Tiger Reserve staff to improve their response to emerging challenges, such as the use of cyberspace for illegal trade. He also spoke about other initiatives to curb wildlife crime, including the wildlife sniffer dog squad deployed by the Reserve.

Mr Ashok Bashakod, Chief Conservator of Forest, Karnataka added: “Besides knowledge and skills there is also a need to equip the Forest Department with modern tools and techniques to help monitor wildlife cybercrime.”
Further “Cyber CLAW” training programmes are planned for forest officials in Tiger Reserves across India.