Rajasthan Forest Department gears up to respond to wildlife cybercrime 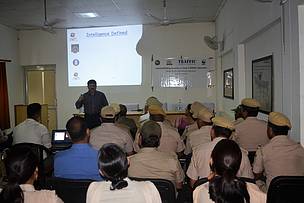 © TRAFFIC India
New Delhi:  With India’s wild Tiger population touching nearly 3000, it becomes crucial that best protection and wildlife law enforcement measures are in place to extinguish any threat to Tiger and other wildlife. In the last couple of years, Sariska Tiger Reserve, Rajasthan has undertaken initiatives to help boost its conservation efforts. However, the threat from poaching and illegal wildlife trade continues to loom expanding its wings further on virtual space.

Traditionally, trade of illegal wildlife has been in physical markets but since the growth of internet, there are compelling evidences that wildlife traffickers are going online to reach a vast virtual marketplace with the mask of anonymity. Presently, lack of efficient tools for effective monitoring of high-volume social media data limits the capability of law enforcement agencies to effectively monitor illegal wildlife trade on cyber space.

During the training Mr Varun Kapoor from Madhya Pradesh Police said, “Smart monitoring of social media can reveal useful information to the enforcement agencies regarding activities of wildlife criminals. Hence, considering the fast-changing dynamics of cyberspace, there is an urgent need to understand the phenomenon and challenges of wildlife cybercrime in order to take appropriate actions to combat this. This capacity building workshop aims to enhance the knowledge and skills of the participants for this purpose”.

Dr Abhishek Bhatnagar, WWF-India gave an overview of the issues related to Tiger conservation and protection in this landscape and how various threats such as habitat loss, human-wildlife conflict and illegal wildlife trade is taking a toll on the wild fauna.

Mr Ghashyam Sharma, Field Director of Sariska Tiger Reserve further added that there is an urgent need to equip forest department with modern tools and techniques to combat wildlife cybercrime in the state. He thanked TRAFFIC and its partners, for taking this initiative to provide timely knowledge and skills to forest officials to respond to the growing wildlife crime in cyberspace.

The workshop in Sariska is fourth in the series of capacity building workshops organized under TRAFFIC’s new programme titled “CyberCLAW” for combating wildlife cybercrime in India. 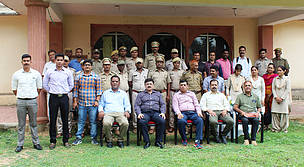