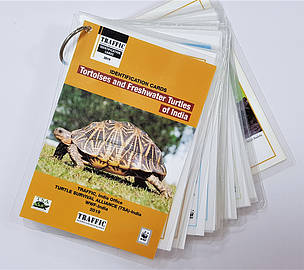 The ID tools’ release follows hot on the heels of “Tortoises and Freshwater Turtles Under Siege”, a study released last week by TRAFFIC which found a minimum of 1,11,310 tortoises and freshwater turtles in illegal wildlife trade in India over a 10-year period from September 2009 to September 2019. This equates to more than 11,000 individuals every year or at least 200 per week since 2009.

A total of 14 Indian species of tortoises and freshwater turtles were found in trade, of which 49% of those identified were Indian Star Tortoise Geochelone elegans, followed by Indian Softshell Turtle Nilssonia gangetica (26%), Indian Flapshell Turtle Lissemys punctata (15%) and Black spotted or Spotted Pond Turtle Geoclemys hamiltonii (9%). Removal from the wild for illegal trade as pets, and for food and medicine, were identified the main drivers of tortoise and freshwater turtle trade in India.

The study also revealed that in more than half of all seizures the species of tortoises and freshwater turtles involved was not reported—apparently because of a widespread lack of capacity to identify the animals involved.

Dr Saket Badola, IFS and Head of TRAFFIC’s India office said: “Fundamental to understanding the dynamics of the illegal tortoise and freshwater turtle trade and ensuring prosecution cases are dealt with appropriately is sound knowledge of the species involved—we hope these easy to use ID tools will help in bridging this gap.”

India’s tortoises and freshwater turtles are listed in different Schedules of the Wildlife (Protection) Act of 1972 depending on species—17 species are in Schedule I, one in Schedule II and five in Schedule IV. Each Schedule prescribes a different level of punishment for poaching and illegal trade, meaning identification of the species concerned is crucial for prosecution cases.

The ID tools provide details about each tortoise and freshwater turtle species found in India, including their area of distribution, legal protection status, identification tips and immediate threats. TRAFFIC will be distributing the tools free of charge to relevant enforcement agencies including officials of the Forest Department, Police, Railways, paramilitary forces; Customs and others.

Dr Shailendra Singh, Director of Turtle Survival Alliance India Program says that these ID cards and foldable ID posters are easy to understand, to use and carry along during field inspections and will surely help to build the knowledge of wildlife law enforcement staff.

TRAFFIC’s identification tools can be obtained by writing to TRAFFIC’s India Office and the factsheet “Tortoises and Freshwater Turtles Under Siege” can be viewed at www.trafficindia.org . 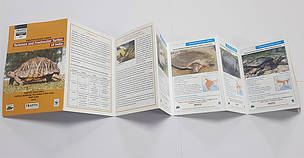 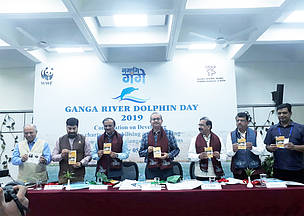