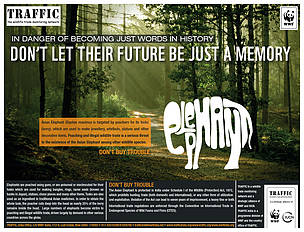 © TRAFFIC India
New Delhi—TRAFFIC’s poster on curbing elephant poaching and illegal trade, from its longest running campaign in India – Don’t Buy Trouble- is showcased at the on-going “Elephants and Us: Considering Extinction” exhibition at the Smithsonian’s National Museum of American History in Washington D.C.

The exhibition opened on November 1 and is timed with the 30th anniversary of the African Elephant Conservation Act of 1988–89, that will explore Americans’ relationship with elephants as it has evolved over time. Visitors to the museum’s Albert H. Small Documents Gallery can explore ideas related to the extinction of elephants through two perspectives: the role that humans have played in the history of ivory consumption and the most recent efforts at species conservation.

“Elephants and Us: Considering Extinction” aims to also educate visitors about the effects of poaching on elephant populations and human encroachment on elephant habitats. On an average 25-30 million visit the Smithsonian Museums every year.

The showcased TRAFFIC’s poster was launched under the campaign- Don’t Buy Trouble- by TRAFFIC’s India Office and WWF-India in 2017, appealing to help curb illegal wildlife trade in some of the most traded wildlife species in India including the Asian Elephant. The message – In danger of becoming just words in history. Don’t let their future be just a memory – came with a clear warning against buying illegal wildlife products.

Dr Saket Badola, Head of TRAFFIC India says, “We are very excited to see TRAFFIC India’s poster at the Smithsonian’s National Museum of American History. With thousands of visitors coming into the Museum every day, this opportunity will help to raise awareness about the threat to Asian Elephants and influence behavior of wildlife consumer encouraging them to refrain themselves from buying ivory products”.

Asian Elephants were once widely distributed throughout India, including in States such as Punjab and Gujarat. Currently, due to significant loss of their habitat they are found in four fragmented populations in South, North, Central and North-east India. They are poached both for revenge, often as a consequence of the conflict with human, and for their tusks, used to make bangles, rings, name seals (known as hanko in Japan), statues, chess pieces and many other items. Large numbers of Elephants become victim to poaching and illegal wildlife trade every year in India.

ENDS
For any queries, please contact Dilpreet B. Chhabra, TRAFFIC, India office at dilpreet.chhabra@traffic.org or call her at +91 9899000472 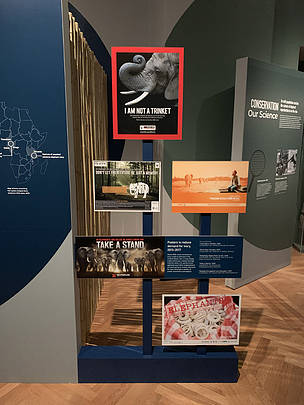 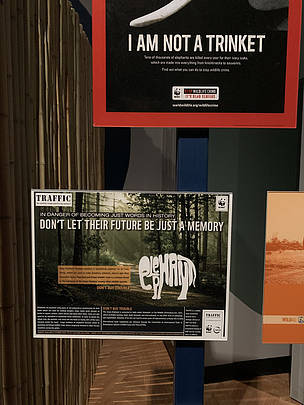