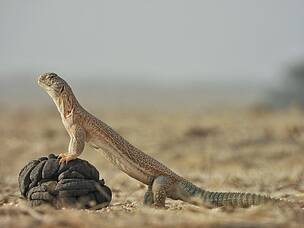 Spiny-tailed lizard
© Radheshyam Bishnoi
Indian Spiny-tailed Lizard Saara hardwickii, one of 230+ lizard species found in India, has been a silent victim of illicit wildlife trade activities for too long. This herbivorous, solitary, burrow-dwelling reptile found in the arid and semi-arid regions of north-western India is targeted for its meat consumed as a delicacy by locals and for the oil obtained from its skin and tail that is sold as a cure for various ailments.

TRAFFIC and WWF-India's latest Factsheet on Indian Spiny-tailed Lizard in illegal wildlife trade released today highlights its ongoing illicit trade and provides information about the species to raise awareness and direct efforts toward its protection. Designed primarily for the enforcement agencies and the general public, the Factsheet aims to clear misconceptions about the species and its illicit use while raising concerns about its growing threats.

"Too often, the limelight is on charismatic wildlife species pulling most conservation efforts towards them. However, it is crucial to pay attention to many lesser-known, yet, ecologically important wildlife species like the Indian Spiny-tailed Lizard that are often heavily trafficked, before they become extinct in the wild," said Dr Merwyn Fernandes, Coordinator, TRAFFIC's India Office.

Mr Ravi Singh, Secretary General & CEO, WWF-India adds, Creating awareness on the Indian Spiny-tailed Lizard is a step towards its protection and conservation. This species is under threat, and the gradual depletion of its numbers will lead to long-term negative effects. We hope to lead on the message of its conservation."
Indian Spiny-tailed Lizard is listed in Schedule II of the Wildlife (Protection) Act, 1972, which prohibits its hunting, trade or any other form of exploitation. It is locally extinct in Uttar Pradesh, and the population in Madhya Pradesh is declining. Presently, the species is primarily restricted to the desert regions of northwest India.

Live Indian Spiny-tailed Lizards have been found in seizures reported at Desert National Park in Rajasthan. Other seizures of both live and dead lizards and their products have been reported in Bangalore (Karnataka) and Mumbai (Maharashtra). Both locations are outside the species' natural range, indicating that the demand for its product is driving its trafficking. 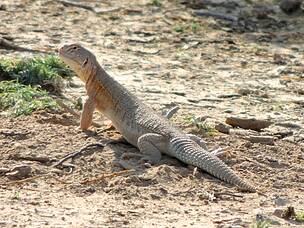