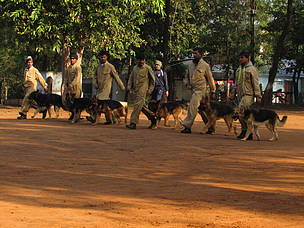 © Shaleen Attre/TRAFFIC
Bhopal: With the passing out parade and a magnificent display of learnt skills by the 14 sniffer dogs and their 28 handlers today at the 23rd Battalion of Special Armed Reserve Forces, located at Bhopal in the state of Madhya Pradesh, India doubled its strength of wildlife sniffer dogs, by deploying these newly trained dogs to its wildlife protection and anti poaching squads across India.

This ceremony was attended by all the seven states- Madhya Pradesh, Assam, Uttarakhand, Maharashtra, Tamil Nadu, Jharkhand and Karnataka- which received their newly trained dogs today.

Mr. Narendra Kumar in his opening remarks congratulated TRAFFIC and WWF-India for their efforts in leading the sniffer dog programme in India. He emphasized the use of sniffer dogs as a highly effective tool for wildlife crime detection and prevention in India. He also congratulated the Dog Training Center in Bhopal for their continuous support for this programme. Mr. Kumar has been a supporter of sniffer dog’s programme for a long time and has taken keen interest in the activities performed by the sniffer dogs in detecting wildlife crimes in Madhya Pradesh.

Mr. K.N. Tiwari, said “Enforcement agencies across India have a long proven experience of using and handling sniffer dogs for crime prevention and detection. We are glad to see their emerging role in curbing wildlife crime and illegal wildlife trade in India. We hope that many more state forest departments deploy sniffer dogs and use them in their wildlife law enforcement endeavors”.

Dr Shekhar Kumar Niraj, Head of TRAFFIC in India said, “India has a huge forest cover and with only 25 trained sniffer dogs, pressure for protecting India’s wildlife remains immense on these four legged creatures. It is TRAFFIC’s vision that at least four to five dogs are deployed in each State in the next few years for boosting wildlife conservation and protection efforts.”

Mr. Ravi Singh, SG and CEO, WWF-India further added, “India’s wildlife is under grave danger from the ever increasing illegal wildlife trade. Poachers and traders are employing new tools and technologies to expand their illicit business and this is proving to be a major challenge for the forest department and other enforcement agencies. Use of sniffer dogs for wildlife crime prevention and detection has proved to be an effective tool and we are happy to be involved in this first of its kind programme in India”.

These 14 professionally trained dogs and their 28 handlers from seven Tiger bearing states of India have now joined 11 dogs and 22 handlers already trained and deployed across India under this programme, taking the total strength of TRAFFIC/WWF-India’s wildlife sniffer dogs to 25. This programme is conducted by the New Delhi based Wildlife Trade Monitoring Network (TRAFFIC), which functions in India as a WWF’s programme division dedicated to monitor illegal wildlife trade and to combat poaching. The programme is funded jointly by TRAFFIC and WWF-India promotes use modern tools and technologies in fighting wildlife crimes.

Starting in 2008, 13 sniffer dogs have already been trained and later deployed at key sites for detection and prevention of wildlife crime where they have been involved in more than 100 significant wildlife seizure cases in recent years. Jimmy, one of TRAFFIC’s sniffer dogs, was awarded a Certificate of Merit by the Governor of Madhya Pradesh in 2013 after the dog helped bust at least 25 wildlife poaching and smuggling cases.
Even though the dogs are  trained for sniffing out wildlife products such as Tiger and Leopard bones and skins, meat, bear bile, etc these sniffer dogs are also detecting other wildlife contraband such as ivory, deer meat, live bird species, Red Sand Boa, Blackbuck, hare, python, rat snake, porcupine and even weapons by self actualization and improvisation. They have been taking up huge roles in wildlife investigation and prosecution.

TRAFFIC acknowledges its on-going partnership with the Dog Training Centre of the 23rd Battalion Special Armed Force, Madhya Pradesh Police Department based in Bhopal, for their continuous support for strengthening wildlife protection across the country. Taking this opportunity, the organization also thanks the donors and supporters of sniffer dogs training programme from different regions of India and the world. 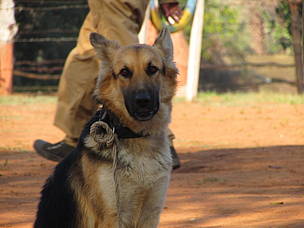 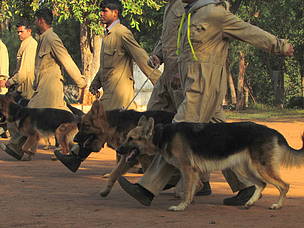