© TRAFFIC
Gwalior, Madhya Pradesh: Thirteen young #dogs began their training today at the National Training Centre for Dogs (NTCD), BSF Academy, Tekanpur Gwalior. The dogs between the age group of 6-9 months will be trained to become wildlife sniffer and tracker dogs and will join their counterparts in the field to help curb wildlife crime in India.

TRAFFIC India, a wildlife trade monitoring network and a strategic alliance of WWF and IUCN, operating as a programme division of WWF-India had pioneered the wildlife sniffer dog training programme for the first time in India in 2008. Since then, 43 dog squads have been trained with support from WWF-India.

This is the sixth phase of the programme that began with these 13 young dogs and 26 handlers (2 handlers per dog) and once trained the dog squads will be deployed by the Forest Departments of eight States – West Bengal (3), Sikkim (2), Uttarakhand (2), Uttar Pradesh (2), Andaman and Nicobar Islands (1), Assam (1), Odisha (1), Kerala (1). It is for the first time that Andaman and Nicobar Islands, Uttar Pradesh and Sikkim will be deploying trained wildlife sniffer dog squads.

Dr. Dipankar Ghose, Director- Species and Landscape programme, said “WWF-India recognizes poaching and illegal wildlife trade as significant threats to wildlife and feels the need to strengthen wildlife law enforcement efforts across the country. Use of wildlife sniffer dogs is a proven practice for curbing wildlife crime across the globe and we are happy that this has been adopted by the enforcement agencies and state forest departments in India. We wish success to the 13 dogs and their handlers for their new journey towards becoming wildlife sniffer and tracking dog squads”.

Dr G.S Nag, CVO, Officer commanding, NTCD congratulated TRAFFIC and WWF-India for the success of wildlife sniffer dog training programme in India. He said “NTCD is happy to have partnered for training wildlife sniffer dog squads. Enforcement agencies across India have long-term experience of using and handling sniffer dogs for conducting seizures and curbing crime. We are glad to see their emerging role in combating wildlife crime and illegal wildlife trade in India. We hope that many more state forest departments deploy sniffer dogs and use them in their wildlife law enforcement initiatives”. 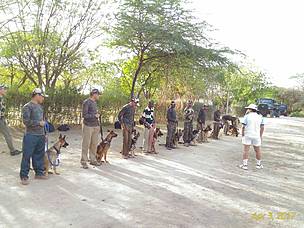