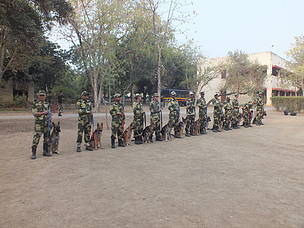 The training was organized by TRAFFIC with support from WWF-India at the National Training Centre for Dogs (NTCD), BSF Academy, Tekanpur Gwalior. The 13 German Shepherd and Belgian Malinios dogs between the age group of 6-9 months along with their handlers began their nine month long training in April this year. They passed out during a ceremony organized on 15 December 2017 at the NTCD where the dog squads also showcased their learnt skills.

Of the 13 wildlife sniffer dog squads, West Bengal has deployed three; Sikkim, Uttarakhand and Uttar Pradesh have deployed two each and Andaman and Nicobar Islands, Assam, Odisha and Kerala have deployed one each. It will be the first time that Andaman and Nicobar Islands, Uttar Pradesh, Sikkim and Odisha will be deploying wildlife sniffer dogs for curbing wildlife crime.

TRAFFIC’s wildlife sniffer dogs popularly known as ‘Super Sniffers’ have been trained to sniff out Tiger and Leopard skins, bones and other body parts; bear bile and Red Sanders. However, this time special training has been provided to the sniffer dog deployed in the state of Sikkim for tracking Yarsa Gumba Cordyceps sinensis, a heavily traded wildlife contraband in the region.  Yarsa Gumba, commonly known as Keera Ghaas (insect-grass) is a parasitic fungus found in the higher reaches of Arunachal Pradesh and more recently in the Garhwal and Kumaon Himalayas in India. It is collected in large numbers and smuggled through Nepal to markets in China for use in traditional medicines.

Dr G.S Nag, CVO, Officer commanding, NTCD said, “NTCD recognizes wildlife crime as a major threat to India’s wildlife and considers deployment of wildlife sniffer dog squads as an adequate response. Therefore, NTCD has partnered with TRAFFIC India to help train wildlife sniffer dogs of the country. The training of these 13 dogs was designed after thorough deliberations with officials from TRAFFIC India and from the various wildlife sanctuaries and tiger reserves, besides incorporating findings from on field studies on the modus  operandi of wildlife criminals.    ”.

Dr Saket Badola, IFS, Head of TRAFFIC India said, “Enforcement agencies across India have robust experience of using and handling sniffer dogs for conducting seizures and curbing crime. We are glad to see the recognition of sniffer dogs in combating wildlife crime and curbing illegal wildlife trade in India. The already deployed Super Sniffers have been successful in conducting seizures and nabbing poachers bringing laurels to TRAFFIC’s wildlife sniffer dog training programme in India. We are hopeful that this programme is institutionalized within the enforcement machinery and taken forward for providing a concerted response to the challenges emerging from wildlife poaching and illegal wildlife trade”. 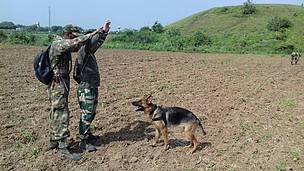