Super Sniffer raises the bar, cracks her first wildlife case within a week of deployment: The Pawfect Story! 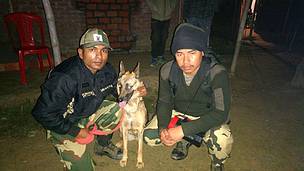 © Assam Forest Department
Quarmy, one of the 13 newly trained wildlife sniffer dogs, cracked her first wildlife poaching case on 27 December 2017, merely a week after her deployment. This extremely agile and well skilled female German Shepherd dog was trained under TRAFFIC India’s wildlife sniffer dog training programme and had passed out from the National Training Centre, Tekanpur, Gwalior on 16 December 2017. She is deployed by the forest department of Kaziranga National Park, Assam and is the first in her batch of dogs to have helped with a wildlife case raising the bar forother newly deployed wildlife sniffer dogs.

Late evening, on receiving information about the alleged wildlife poacher and the hidden arms that were possibly meant for poaching, the officials from the northern range of Kaziranga National Park along with Quarmy and her handler Laxmi Nandan Baruah set out immediately to nab the poacher and recover arms. The team reached the house of the alleged poacher which was uninhabited at that time. The dog was given the scent of the shirt found inside the accused’s house. Quarmy followed the scent and led the team through the dark and forested path of 2 km to a pond. The officials searched the entire area around the pond but couldn’t find anything while the dog kept indicating towards the pond. Finally, a team member went inside the water and recovered weapons - .303 rifle and a silencer-from the bottom of the pond.

Parallelly, the coordinating wing of the forest department had arrested the alleged poacher from another location and the dog squad was then sent for his identification. The dog well remembering the scent from the shirt of the accused identified the poacher immediately. Quarmy thus helped the forest officials in cracking the wildlife case setting high standards for other newly trained wildlife sniffer dogs.

Kaziranga National Park in Assam is extremely rich in wildlife and therefore a prospective target for wildlife poachers and illegal wildlife smugglers.  Assam also hosts the largest population of Greater One Horned Rhinoceros in India and its proximity to international borders makes it extremely vulnerable.  Deploying a wildlife sniffer dog squad is crucial for curbing wildlife crime in the region.

Dr Saket Badola, Head of TRAFFIC India said “We congratulate the dog squad as well as the forest department officials who worked as a team to nab the alleged poacher and seize weapons. This is a huge achievement for a young newly trained dog who has just joined the department. We hope that the wildlife sniffer dog squad at Kaziranga National Park will become an integral part of their team for mitigating wildlife crime in the region”.
To know more about the programme please visit www.trafficindia.org