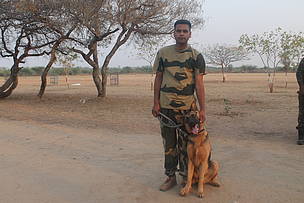 © Amar Nath Choudhary/TRAFFIC
Gwalior, Madhya Pradesh: A new batch of 12 dogs and their handlers began their training early this week at the National Training Centre for Dogs (NTCD), BSF Academy, Tekanpur Gwalior. On completion of their nine-month long training, the dog squads will join their counterparts deployed across the country, taking the total strength of India’s wildlife sniffer dog squads to 68.

The new dog recruits between the age group of 6-9 months of breeds German Shepherd and Labradors, are the 7th batch of TRAFFIC’s wildlife sniffer dog training programme that began in 2008 with support from WWF-India. The young dogs will go through a rigorous training schedule that will instill focus, discipline and obedience much required to become a wildlife sniffer dog.

Of the new batch, two dog squads each will be deployed by the Forest Departments of West Bengal, Telangana and Maharashtra; one each will be deployed by Forest Departments of Uttarakhand, Tamil Nadu, Madhya Pradesh, Himachal Pradesh , Kempegowda International Airport, Bengaluru and by Customs at Indira Gandhi International Airport, Delhi.

Dr Saket Badola, Head of TRAFFIC India said, “The response to TRAFFIC’s wildlife sniffer dog training programme in India has been overwhelming and this is reflected through the numerous requests received for training and deployment of wildlife sniffer dog squads from across the country. It is further encouraging to learn that the Customs department in India recognizes the importance of wildlife sniffer dog and has come forward to deploy these dogs at the airports. Airports are an important transit point and any assistance to the enforcement agencies at the airport for controlling wildlife smuggling will play an important role in curbing this menace.”.

TRAFFIC’s wildlife sniffer dogs popularly known as ‘Super Sniffers’ will be trained to sniff out Tiger and Leopard skins, bones and other body parts; bear bile, Red Sanders etc. along with several other illegal wildlife products.

Dr G.S Nag, CVO, Officer commanding, NTCD, at the inaugural ceremony organized on 2nd April at Tekanpur said, “This is the third batch of wildlife sniffer dog being trained by us in collaboration with TRAFFIC. NTCD recognizes the important role played by sniffer dogs for combating wildlife crime and is hopeful that these dog squads are fully used in the states of deployment. We welcome the new batch and wish them good luck for the training”.

Also began on 2 April was the refreshers course for the already trained and deployed seven wildlife sniffer dog squads that were chosen based on their number of years of deployment, physical fitness and capabilities. The wildlife sniffer dog squads belong to the states of Uttarakhand (3), Madhya Pradesh (3) and Maharashtra (1) and will go through a rigorous training schedule for a period of 45 days at NTCD, Tekanpur, Gwalior.
To know more about the programme, please visit www.trafficindia.org or call Dilpreet B. Chhabra, Senior Communications Manager, TRAFFIC India at 011-41504786/ 9899000472 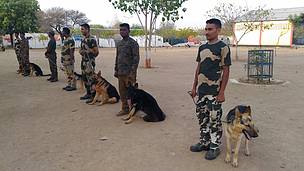