Yami Gautam joins the fight against wildlife crime in India 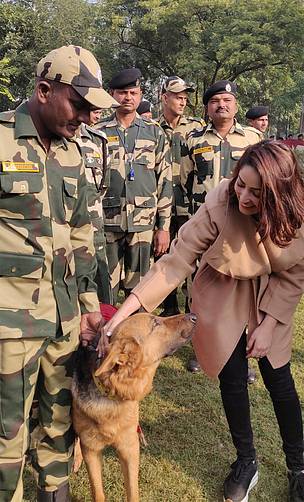 Illegal wildlife trade is the fourth largest organized criminal activity globally, threatening the survival of many species the world over. India, being one of the world’s largest biodiversity hotspots, has been a target of wildlife poachers and smugglers. Combatting this crime is therefore urgent and crucial to the conservation of the natural world and it is necessary that the best enforcement practices are deployed to address the issue. Using sniffer dogs for crime prevention and detection is a long proven practice that has reaped significant benefits over the years.

TRAFFIC with support from WWF-India launched the Super Sniffer programme in the country to help combat illegal wildlife trade in 2008.  The initiative helped raise and train wildlife sniffer dog squads to strengthen anti-poaching and anti-trafficking measures of the Forest Departments and other enforcement agencies concerned with wildlife protection.

At the Graduation Ceremony, TRAFFIC and WWF-India’s seventh batch of 10 dogs and their handlers passed out only to join their counterparts deployed across the country, taking the total strength of TRAFFIC’s wildlife sniffer dog squads to 66. These dog squads belonging to the Forest Departments of  Telangana, Maharashtra, Uttarakhand, West Bengal, Tamil Nadu, Madhya Pradesh, Himachal Pradesh and Kempegowda International Airport, Bengaluru also interacted with Yami Gautam during the Ceremony.

Voicing her concern on the issue of illegal wildlife trade, Yami said, ‘’Illegal wildlife trade is increasing by the day, threatening the existence of our wildlife and the rich biodiversity of India.  For me, these heroic dogs are not just ‘man’s best friends’, but also nature’s best friends! I have heard some heartwarming stories of their bravery during the ceremony and I am proud to be able to help and support their cause.’’

Dr. Saket Badola, IFS, Head, TRAFFIC India, speaking at the event, said, ‘’Illegal wildlife trade and trafficking is a transnational and organized criminal activity, threatening the future of our wild resources. Tigers, leopards, elephants, pangolins, birds, timber species like red sanders, orchids, turtles and tortoises and many other endangered wildlife are targeted for this illicit trade.  Super Sniffers have proven to be the game changers, acting with tremendous skill and courage to  protect wildlife. Yami’s support to the Super Sniffer programme will help us spread awareness about the issue of wildlife trafficking and poaching. It will also help us strengthen the work that the Super Sniffers and their handlers are doing to protect the wildlife of this country.’’

Dr G.S Nag, CVO, Officer Commanding, NTCD said, “This is third batch of wildlife sniffer dogs that was trained at NTCD under TRAFFIC’s programme and we are happy to have partnered for this important cause. Support of well-known personalities like Yami Gautam will help bring visibility and acknowledgement to the efforts of wildlife sniffer dogs in the field of wildlife protection in India”.

Super Sniffers have undertaken at least 250 wildlife seizures in India and have been trained to detect tiger bone and skin, leopard bone and skin, elephant tusk, bear bile and Caterpillar Fungus.   .