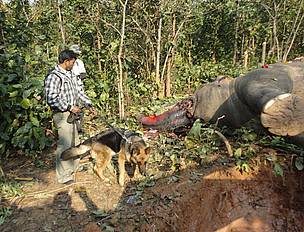 On reaching the spot where the Elephant had died, the forest officials discovered that the tusks were missing and immediately launched a search. With no success, the sniffer dog was called in from the Betla Tiger Reserve. She searched the area extensively and led the team to the spot where the tusks were hidden. The whole operation was successfully coordinated by Mr Kamlesh Pandey, DFO, Wildlife Division, Ranchi.

Tracey is currently deployed by Betla Tiger Reserve and is one of the seven sniffer dogs trained under TRAFFIC India/WWF-India’s sniffer dog training programme. Its handlers Rajbeer and Rampado Sahidashave have also undergone specialized training. Forest Department officials in Jharkhand are greatly enthused by this success in recovering such wildlife products. This is the first time in India that sniffer dogs have been trained specifically for detecting illegal wildlife products and are being used in the forest areas across the country.

MKS Pasha, Coordinator- TRAFFIC India said, “Illegal wildlife trade continues to prevail and has evolved into an organized activity threatening the survival of many species in India. The current practices for combating illegal wildlife trade have not proved sufficient to curtail this. In order to curb this growing menace, it is necessary that the best enforcement practices are deployed. Using sniffer dogs for crime detection and prevention is one of the long proven practices TRAFFIC has experience of running in several countries. We are happy it’s making a difference in India too and hope more states will come forward to adopt this as a tool in the fight against wildlife crime”.

Ravi Singh, SG & CEO, WWF-India added, “We are proud to have initiated this innovative programme that is leading to early successes. The dogs are being used regularly for patrolling and are proving to be a strong deterrent”.

“This is not the first time that the sniffer dogs have helped curb wildlife crime. In the recent past, Jackie, one of the qualified dogs apprehended two poachers in Hoshangabad district of Madhya Pradesh. Raja, another of the trained dogs posted at Bhrampuri Wildlife Division, Maharashtra, helped bust a Leopard poaching case that led to the arrest of seven involved” he further added.

The sniffer dog training programme was started in India by TRAFFIC/WWF in the year 2008 and since then seven dogs and 14 handlers have been successfully trained. The dogs have been trained to detect wildlife articles such as Tiger bone, Tiger skin, Leopard bone, Leopard skin and bear bile and are currently placed with the Forest Departments of Haryana, Maharashtra, Madhya Pradesh and Jharkhand. 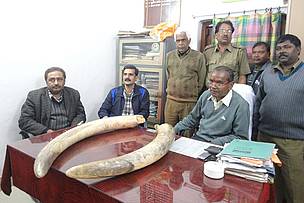