WWF-India participates in the Rongali Bihu Festival at Kaziranga 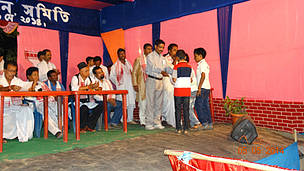 Students getting awarded at the Rongali Bihu Basanta
© Utsav © Tridip Sharma
As part of WWF-India’s ongoing commitment to involve local communities as stakeholders for wildlife conservation, the Kaziranga Karbi Anglong landscape team in Assam organized several competitive events to augment the festivities in this year’s celebration of the Rongali Bihu Basanta Utsav. The occasion was celebrated at the Kohora Main Centre, Kaziranga National Park between 4 and 6 May 2014, and was attended by the local communities inhabiting the fringe areas of the park.

The Rongali Bihu is one of three Bihu festivals of Assam, all of which hold immense cultural significance and are celebrated by people of all religious beliefs and castes. The arrival of the Rongali Bihu is met with great fervor and excitement as it signifies the onset of spring, and changes to the landscape, that define the season. The Rongali Bihu, sometimes known as Bohag Bihu, also marks the arrival of the Hindu New Year, the beginning of the agricultural season in Assam and is traditionally celebrated with the singing of Bihugeet songs, accompanied by folk dances and other fanfare.

The event in Kohora was inaugurated with a flag hoisting ceremony followed by several cultural processions over the course of the three-day event. Three competitive events were organized and sponsored by WWF-India – an art competition, quiz competition and a marathon race. The marathon race event was set to the theme to help promote the importance of conservation among the communities in participation and attendance, and was inaugurated by the Vice President of the Kohora Basanta Utsav Samity, Mr Punen Gogoi.

Swapan Nath, one of the participants of the marathon stated, “I am very passionate about wildlife and conservation. Without conservation, we cannot live harmoniously with wildlife. I try to help and support the Forest Department and local NGOs as much as possible, so I took part in the marathon to support conservation.”

Primary and secondary school groups were created for the art and quiz competitions, and WWF-India awarded the top three winners with prize money and certificates. The top two winners of the marathon were awarded cash prizes of Rs 3, 500 and Rs 2, 500 respectively.

"We were eager to strengthen our relationship with local communities in Kohora, Kaziranga. Our first step towards this was to interact with one another and participate and share diverse cultural activities. Although the festival itself was not about conservation, it is important for us to take an interest in local communities and their culture, as they reciprocate by taking an interest in the field of conservation,” said Dr Pranab Bora, Coordinator, Kaziranga Karbi-Anglong Landscape, WWF-India.

WWF-India will continue to work with local communities to build support for the conservation of the region’s rich wildlife and their habitats. 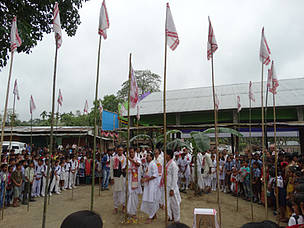