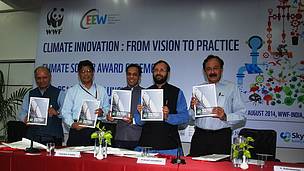 Speaking at the event, Shri Prakash Javadekar, said, “I would like to congratulate all the winners of the ‘Climate Solver Awards’ and authors of the ‘RE+: Renewables beyond Electricity’ report. Such initiatives are critical to raise awareness about climate change. Today, climate change is real and we need to fight it through appropriate adaptation and mitigation measures along with innovative technologies. We need to pursue innovation as it is the sustainable way of development in any country.”

He further added, “Climate change needs optimism and desire to make the world a better place. Our government is commited towards the same and hence we have chosen the clean energy path as the mantra of the Modi government.”

The Climate Solver winners were awarded under two categories – Energy Access and Greenhouse Gas (GHG) Reduction. Of the nominations received in the categories, the winners and their award winning innovations for Climate Solver 2013 included the following:

Climate Solver (CS) is a global innovation platform to encourage and support low carbon innovative technologies that contribute towards mitigating climate change. The platform strengthens investment in the development and widespread use of low carbon technologies in SMEs, with technologies aimed at drastically reducing greenhouse gas (GHG) emissions or providing improved energy access.

Climate Solver – India, launched in 2012, aims to identify and highlight the problems, barriers and challenges faced by innovative entrepreneurs, and improve the market uptake for their technologies.Climate Solver 2013 focussed on “Climate Innovations: From vision to practice”.

The event also saw the release of a report titled, “RE+: Renewables beyond Electricity – Solar Air Conditioning & Desalination in India”, jointly prepared by WWF-India and CEEW, an independent think-tank. The report focusses on two innovative renewable energy applications, i.e. solar air conditioning and solar desalination and is a follow-up to the previously released report, RE+: Renewables beyond Electricity, a compendium of 14 innovative renewable energy applications (beyond electricity generation).

“Technologies such as solar air conditioning and solar desalination hold promise of becoming harbingers of change, equity and prosperity for 45 per cent of India’s rural households, which still struggle with electricity supply. It is absolutely critical to build a better understanding of the technological, financial, institutional and regulatory challenges hindering rapid large scale deployment of these solutions in the country,” added Dr. Arunabha Ghosh, CEO of CEEW, who also served as a jury member of the Climate Solver Awards.

The Climate Solver initiative was launched by WWF-Sweden in 2008 and has now expanded to developing countries including India, China and South Africa. WWF-India has been partnering with the Confederation of Indian Industry (CII), New Ventures India, Centre for Innovation Incubation and Entrepreneurship (IIM Ahmedabad), Skyquest Technology Consulting Pvt. Ltd, National Innovation Foundation and Technology Development Board (Department of Science and Technology, Government of India) for the Indian chapter of the Climate Solver initiative.

Speaking at the event, Mr. Ravi Singh, SG & CEO, WWF-India said, “Innovations are essential change agents for any system, and have transformative potential for mitigating climate change and enabling energy access. Through the Climate Solver initiative, WWF–India aims to promote innovative and scalable low carbon technologies that promote energy access and reduce GHG emissions. The awards endeavour to showcase practical solutions provided by Indian SMEs and their significant replication potential at a national and perhaps, a global level.”

About CEEW:
The Council on Energy, Environment and Water (CEEW) is an independent, not-for-profit policy research institution. Ranked as India’s top climate-related think-tank, CEEW addresses pressing global challenges through an integrated and internationally focused approach. It does so through high-quality research, partnerships with public and private institutions, and engagement with and outreach to the wider public. For more information, visit www.ceew.in