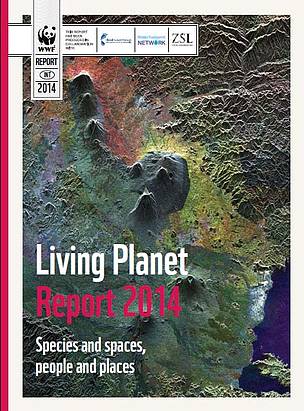 Living PLanet Report 2014
© WWF / ESA
New Delhi – Asian cities are demonstrating that Earth-friendly solutions to global problems do exist, as threats to the natural environment mount, according to the Living Planet Report 2014 released today by WWF. These solutions are urgently needed as environmental indicators including wildlife populations show sharp declines around the world.

The Living Planet Report 2014 is the tenth edition of WWF's biennial flagship publication which tracks over 10,000 vertebrate species populations from 1970 to 2010 through the Living Planet Index – a database maintained by the Zoological Society of London. The report's measure of humanity's Ecological Footprint is provided by the Global Footprint Network.

While the findings reveal that the state of the world's species is worsening, the report also includes WWF's “One Planet Perspective” with strategies to preserve, produce and consume more wisely. It also includes examples of how communities throughout Asia are already making better choices to reduce their Ecological Footprint and reverse biodiversity loss. Of the many examples reported from across Asia, the document highlights government incentives in Shanghai, China, for rooftop solar power installations for households and businesses. Shanghai is also taking measures to promote urban farming, with more than 55 percent of the city's vegetables being produced locally, helping reduce greenhouse gas emissions, providing employment and alleviating pressure on natural ecosystems.

The Living Planet Report 2014 states that humanity’s demand on the planet is more than 50 per cent larger than what nature can renew - meaning it would take 1.5 Earths to produce the resources necessary to support our current demand. According to the findings, the Ecological Footprint of the top five countries makes up about half the global total. Of these, China is ranked at 76th in its per capita footprint but has the world’s biggest national population and hence the planet’s largest national footprint. When multiplying population with per capita demand, India shifts from having the 136th largest Footprint per capita to the third largest in total.

The populations of fish, birds, mammals, amphibians and reptiles have declined by 52 per cent in the 40-year period as measured by the report. The decline of biodiversity in the wider Asia-Pacific region ranks only behind Latin America in the same period. For the thousands of species tracked by the report, tropical regions show a 56 per cent loss across populations compared to 36 per cent in temperate zones.

The report also highlights the dire situation for local populations due to increasing water scarcity and the alarming situation of depleting ground water resources and aquifers in countries like India, Australia and the United States. These three countries with the highest water footprint of production also contain 8 of the top 10 most populous river basins experiencing almost year-round scarcity, a problem that is likely only to get compounded by climate change, population growth and developmental imperatives.

Speaking about the findings of the report, Mr. Marco Lambertini, International Director General, WWF, said “We urgently need bold global action in all sectors of society to build a more sustainable future.” With research showing that it is possible for us to increase our living standards while restraining resource use, Mr. Ravi Singh, Secretary General and CEO, WWF-India said, “The Report underlines the importance of the choices we are making every day and their impact on the planet.“It is imperative to take steps to ensure that all future development is sustainable.”

The Living Planet Report 2014 is released as the majority of human population lives in cities. Urban areas worldwide are responsible for more than 70 per cent of the planet's energy-related carbon emissions, but they also have the potential to become centres of renewable energy production and energy efficiency, according to the report.

The complete report, summary and support material can be found at www.panda.org/LPR

About Global Footprint Network
Global Footprint Network promotes the science of sustainability by advancing the Ecological Footprint, a resource accounting tool that makes sustainability measurable. Together with its partners, the Network works to further improve and implement this science by coordinating research, developing methodological standards, and providing decision-makers with robust resource accounts to help the human economy operate within the Earth’s ecological limits. www.footprintnetwork.org