Beyond Belief: Linking faith and conservation 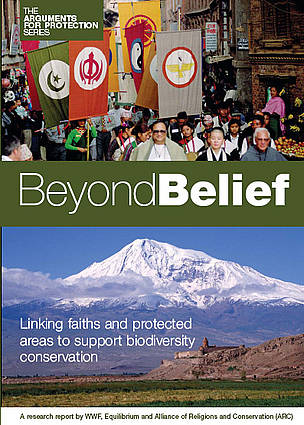 The report looks at how different faiths interact with one of the main tools of conservation – the Protected Areas. These links come in two major forms – sacred places which are both sacred natural sites and built environments existing in natural or semi-natural areas and influence of faiths wherein through their philosophy, actions and influence, faiths can have a major impact on the way their followers view the protection of nature. The report mentions that the sacred areas are probably the oldest form of habitat protection on the planet and still form a large and mainly unrecognized network of sanctuaries around the world. A proportion of these sites are also highly successful at conserving natural ecology and biodiversity.

One hundred protected areas around the world which also contain important values to one or more faiths were surveyed and some sacred sites outside the protected areas that have high conservation values have also been discussed. These issues are discussed in greater detail in 14 case studies from Kenya, Tanzania, Egypt, Lebanon, India, Sri Lanka, Indonesia, China, Mongolia, Europe, Finland, Australia and Colombia.

This report was formally launched in India on 25 July 2006 and for this purpose, Gangtok was selected as the venue. Given the rich traditional values and the local culture that is also protecting some of the wildlife habitats in this region, Gangtok’s selection as the launching pad is appropriate.

A case study on the Eastern Himalayas Sacred Gumpa Forests, authored by Liza Higgins-Zogib and Sudipto Chatterjee has also been included in this report. It tells about the different Gumpa forests in Sikkim along with the monasteries’ role in conservation of biodiversity. This chapter also raises concern that however influential the monastic institutions have been in the past, their influence seems to be slowly dwindling and, in parallel, environmental issues are mounting. Evidence of traditional societies breaking up is apparent. The decline of monastic influence and unchecked development of certain areas has undoubtedly had a negative effect on the environment. Illegal felling of trees, encroachment into forest areas, pollution of rivers and lakes are just some of the consequences.