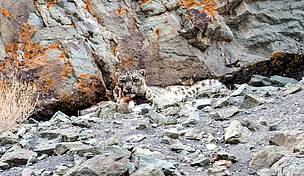 © WWF-India
Ladakh: Recently emerged photographs of a snow leopard resting atop a cattle pen with its prey – a freshly-hunted calf -- in Matho village, Ladakh, tells the story of why WWF-India and the Department of Wildlife Protection, Jammu and Kashmir, are building predator-proof corrals across several high-altitude Himalayan villages.

In the wee hours of morning on 20 March 2016, WWF-India team working in the Western Himalayas, received a panic call from local villager Mr.Tsewang Nurbu. He reported that a snow leopard had broken into his neighbour’s cattle pen and picked up a calf at about 5 am. Mr.Nurbu was one of the villagers in Matho, who had taken possession of his predator-proof corrals in September, when the first set of predator-proof corrals were constructed and handed over to the local communities. These new corrals – affordable and simple to use –are expected to massively reduce conflict by fully protecting livestock from snow leopard attacks.

Nurbu said that he saw the snow leopard circling his cattle enclosure on the night of 19 March. “After several attempts, the animal had perhaps found my livestock inaccessible and hence approached the adjacent corral,” he explained.

When the WWF-India team from  the Western Himalayas Landscape reached the spot, they found the snow leopard perched comfortably atop a nearby hill, a few meters away from the corral it had broken into, feeding on its prey. The officials of the Department of Wildlife Protection, reached the location immediately as well.
“We reached the spot about 3 hours after the incident, but the cat was still there, resting after having its fill, lazily guarding the leftovers. The animal stayed there till about 8 pm that day and returned to finish its meal the next day,” said Dr.Pankaj Chandan, Team Leader, Western Himalayas Landscape, WWF-India. He explained that the cat was barely 250 to 300 meter away when spotted, however, it remained unperturbed and calm despite being aware of human activity in its vicinity.

The calf belonged to Mr.Yeshi Namgail. There was some disquiet in the village after the incident but no resentment towards the predator, Dr.Chandan said.  “After having its fill of the freshly hunted prey that day, the animal returned to feed on the leftovers the next day, however, there were no attempts to hurt or chase away the predator,” he explained.

WWF-India plans to immediately take up work on constructing predator-proof corral for Mr.Namgail, in an effort to ensure long-term relief from such attacks. “In September, we set up a few such corrals on a trial basis. Now that we realize how important and effective they are for the local communities and for our conservation efforts, we plan to take up this work across the snow leopard landscape in Ladakh on a priority basis. Our aim is to make sure that every corral in Ladakh is made predator-proof, reducing conflict considerably,” said Dr.Chandan, adding, “We have already made a beginning by focusing on high livestock depredation hotspots in the first phase of this project.”

This project is supported by JM Financial and Tata Housing. 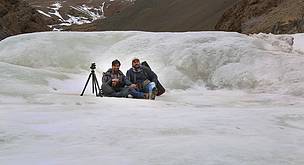