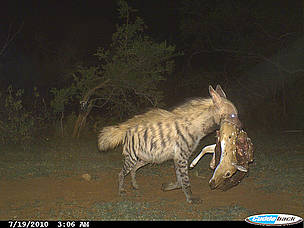 By Prameek Kannan
Our team was on our way back to base one evening after conducting household surveys in the Western India Tiger Landscape. We decided to take a small side-street on the outskirts of Sawai Madhopur to avoid the dust of the construction work on the main highway. We were approaching a garbage dump when an animal bolted in front of the vehicle, with an unusual loping gait. Street dogs don't run like that, and it was far too large to be one. We stopped and shined our flashlight out the window, and two pairs of eyes stared back at us through a thorny bush. A motorcycle rode past, and the eyes quickly faded back into the darkness.

Just as we drove further ahead, we saw another animal. It was a large striped hyena! Standing around 3 feet at the shoulder, with a huge head and dark-colored massive jaws - it was a majestic and slightly an intimidating sight. I'd only ever seen these elusive ghosts a couple of times before. Usually, they bolt and vanish within seconds. This one, however, seemed very calm. When agitated, they raise the crest on top of their back and shoulders, this one didn't do that, and looked back at us for a few seconds. It marked its territory and walked quietly away out of sight. I was in complete awe!

Striped hyenas fascinate me, they're extremely elusive and poorly studied, and not to mention, look like nothing else out there. Hyenas (striped, spotted and brown hyenas) have the most powerful jaws of any terrestrial animal. This comes in very handy, as no mammal can crush bones like a hyena.

Thanks to their nocturnal nature, and shy disposition, striped hyenas are rarely seen. They have the largest distribution of any hyena, stretching from East Africa to Central Asia in the north all the way to India in the east.

With protected areas comprising small fractions of the planet, and human needs demanding ever more space, multiple-use spaces have never been more important for conservation. This makes it imperative to understand and document their ecological role in a rapidly changing human-dominated landscape.