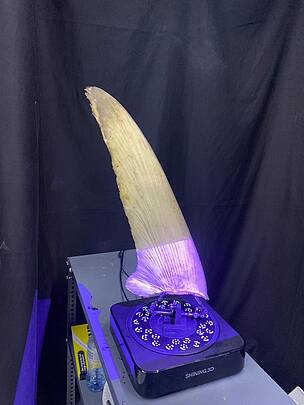 New Delhi- Identifying protected shark species purely from their fins – especially any caught and smuggled illegally – is an enormously challenging task. Knowing this, TRAFFIC has created a set of 3D printed and painted replica fins to assist customs officials and enforcement officers globally in this essential job to help curb the illegal wildlife trade.

The printed fins represent a dozen regularly traded, eleven of them CITES1-listed species, including Great Hammerhead, Oceanic Whitetip and Silky sharks, created from 3D scans of real dried sharks fins. Giant guitarfish Rhyncobatus djiddensis, found in India and protected under its Wildife (Protection) Act, 1972, is also covered in this tool.

In India, extraction, possession or trade in 10 elasmobranchs  is completely prohibited as they are listed in India’s Wildife (Protection) Act, 1972. Also the prevailing law prohibits removal of fins of any shark species on-board of an offshore fishing vessel under the fin attached policy. Additionally, there is a blanket ban on the export and import of shark fins of all species of sharks, covered under the (Export-Import) EXIM policy. India is also a member of CITES which also regulates international trade of shark fins. However, despite all these measures, there are reports of illegal shark fin trade from India.

The demand for shark fins, especially from Asia, drives a illegal yet lucrative international trade, which is pushing many more species towards extinction. Correct identification of shark fins to species level is the major challenge in effectively curbing this activity. This new initiative aims to aid enforcement agencies by providing an easy to use identification tool that allows for quicker and more confident decision-making on shark fin identification.

“Law enforcement officials around the world face the massive challenge of identifying shark fins in international trade to a species level in order to effectively enforce CITES. As if that was not difficult enough, they must correctly identify wildlife such as this alongside all the other contraband they’re looking out for,” explains TRAFFIC fisheries trade expert Markus Burgener, based in South Africa. “It’s quite an overwhelming task and due to these identification difficulties, it often results in shark fins from illegal sources not being identified as such."

“These replica fins are expected to significantly improve the accuracy of active inspection, identification, and seizure of illegal shark fin consignments,” continued Markus Burgener. “They will help empower law enforcement officials the world over to more effectively disrupt the illegal trade in shark fins, which is causing significant detriment to our oceans.”

The 3D scan files and associated painting instructions for 22 fins are now available for free on the TRAFFIC website as part of the organisation’s ongoing efforts to combat this illegal trade.

Dr Saket Badola, Head of TRAFFIC, India Office adds, “ The lack of ability to correctly identify species of shark from the products in trade, is a major challenge faced by enforcement agencies in India. This lack of species identification skill leads to difficulty in not just stopping the illegal trade but also in accurate documention of legally permitted trade in  CITES Appendix II listed species. This tool intends to bridge this capacity gap, and is likely to help in combating illegal trade of protected species and  in gathering of accurate trade data related to legally permitted speices. This in turn promises to enhance protection of sharks in India”.

TRAFFIC developed the replica fins with the support of the South African Department of Forestry, Fisheries and Environment, and US shark expert Debra Abercrombie and with active input from several committed South African-based service providers.

Distinctive markings and colouration, which are crucial for accurate identification, are incorporated into the replica fins’ development. Comprehensive painting guidance is included in the downloadable files to ensure the 3D fins can be accurately replicated for use by law enforcement agencies across the world.

Global assessments estimate that between 26 and 73 million sharks are traded each year. But the actual figure is likely to be far higher, even when conservative values of unreported bycatch or illegal fishing are accounted for.

Find out more and download the toolkit for 3D printing at www.traffic.org

Notes to Editors
1 Convention on the International Trade in Endangered Species of Wild Fauna and Flora
2 Shark species include: All species listed above are classified on the IUCN Red List as Vulnerable to Critically Endangered.

About the 3D replica shark fins toolkit
The online toolkit allows for the production of fin sets for training and fins for day-to-day use by law enforcement officials in situations where fin identification is required. The latter are printed with the name of the shark and type of fin, and a section where a dedicated QR code can be attached. When scanned with a cell-phone, this code links to fin-specific web pages, which provide additional information and guidance on the identifying features for that species.

About TRAFFIC
TRAFFIC is a leading non-governmental organisation working globally on trade in wild animals and plants in the context of both biodiversity conservation and sustainable development.

About ReTTA
ReTTA is a TRAFFIC project aiming to Reduce Trade Threats to Africa’s Wild Species and Ecosystems. The project is funded by Arcadia—a charitable fund of Lisbet Rausing and Peter Baldwin.

About Arcadia
This research was possible thanks to funding from Arcadia.
Arcadia is a charitable fund of Lisbet Rausing and Peter Baldwin – it supports charities and scholarly institutions that preserve cultural heritage and the environment. Arcadia also supports projects that promote open access, and all of its awards are granted on the condition that any materials produced are made available for free online. Since 2002, Arcadia has awarded more than $777 million to projects around the world. 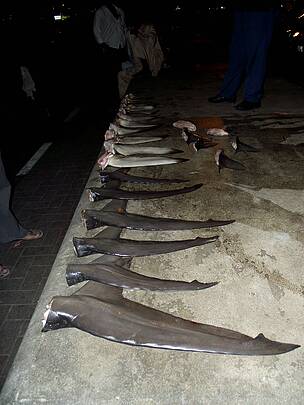 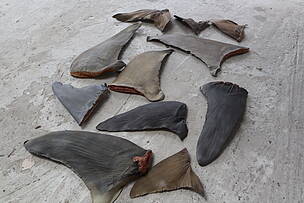 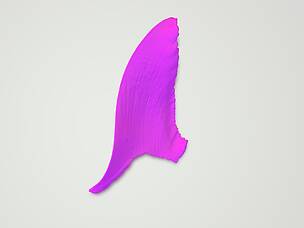