Human-wildlife conflict one of the greatest threats to wildlife species: WWF and UNEP report 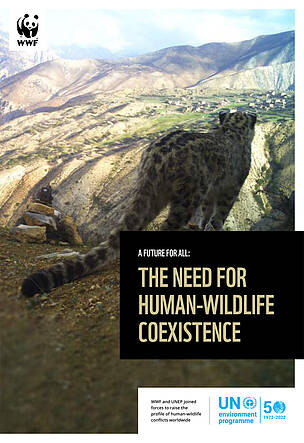 New Delhi, 8th July 2021 – Conflict between people and animals, from China’s famed wandering elephants raiding farms for food and water to wolves preying on cattle in Idaho, USA, is one of the main threats to the long-term survival of some of the world’s most emblematic species, warns a new report from WWF and the UN Environment Programme (UNEP), out today.

Human-wildlife conflict - when struggles arise from people and animals coming into contact - often leads to people killing animals in self-defence or as pre-emptive or retaliatory killings, which can drive species to extinction.
The report, A future for all - the need for human-wildlife coexistence (featured contributions from 155 experts from 40 organisations based in 27 countries), highlights that globally, conflict-related killing affects more than 75% of the world's wild cat species.[1]As well as many other terrestrial and marine carnivore species such as polar bears and Mediterranean monk seals and large herbivores such as elephants. In India, data from the Ministry of Environment, Forest & Climate Change indicates that over 500 elephants were killed between 2014-2015 and 2018-2019, most related to human-elephant conflict. During the same period, 2,361 people were killed as a result of conflict with elephants.

“Within a human lifetime, we have already seen extraordinary and unparalleled changes to our planet. Global wildlife populations have fallen an average of 68 per cent since 1970,” says Margaret Kinnaird, Global Wildlife Practice Leader at WWF International. “Human-wildlife conflict, in combination with other threats, has driven the significant decline of species that were once abundant, and species that are naturally less abundant have been pushed to the brink of extinction. Unless urgent action is taken, this devastating trend will only worsen, wreaking detrimental and, in some cases, irreversible impacts on ecosystems and biodiversity.”

“This report is a clarion call to elevate the problem of human-wildlife conflict and give it the attention it deserves in national and international processes,” says Susan Gardner, Director of UNEP’s Ecosystems Division. “It is a call for the adoption of approaches that identify and address the deeper, underlying causes of conflict while developing systemic solutions with affected communities as active and equal participants in the process. As demonstrated in many of the case studies in this report, coexistence is both possible and attainable.”

While people the world over reap the benefits of maintaining flourishing wildlife populations - healthy ecosystems that allow us to survive, provide food and enable livelihoods - catastrophic impacts such as injury and death and the loss of property and livelihoods put tremendous stress on those who live alongside wildlife, often in developing nations rich in biodiversity, leading to financial insecurity and poor physical and mental health.

India faces an increasing challenge of human wildlife conflict, which is driven by development pressures. With the world's second-largest human population along with the largest wild populations of tigers, Asian elephants, One-horned rhinos, Asiatic lions, and other globally threatened species, India faces urgent problems of human wildlife conflict that must be addressed to achieve a socially just form of conservation. India’s elephants probably embody the problem the best. Elephants in India are restricted to just 3-4% of their original habitat, with their remaining range plagued by deforestation, invasive species, and climate change. This is pushing elephants to seek resources outside of forests and protected areas. As a result, marginalised people face the brunt of elephants' increasing reliance on crops. As many as 500 people are killed by elephants, and thousands of families facing crop and property loss to elephants annually.

The report says that completely eradicating human-wildlife conflict is not possible but that well-planned, integrated approaches to managing it can reduce conflicts and lead to a form of coexistence between people and animals. Such approaches require work on prevention, mitigation, response, research and monitoring, all backed by strong policy support and the participation of local communities.

An example of this can be seen in Sonitpur District, Assam, where large-scale deforestation & degradation were driving increases in elephant crop-raiding that led to accidental human deaths and retaliatory killings of elephants. WWF India during 2003-2004 developed the Sonitpur Model by which community members were connected with the state Forest Department and given training on how to work with them to drive elephants away from crop fields safely and human habitations. WWF India further built on these institutions by developing a low-cost, single strand, non-lethal electric fence to ease the guarding of crops from elephants. In some situations, the results have been significant. In the Gohpur area of Biswanath district, some 212 ha of crops were being lost annually to elephants before these interventions in 2015—at which point crop losses dropped to zero for four years running. Human and elephant deaths have also reduced significantly from what it was during the beginning of this project.

The report also highlights how accelerated habitat fragmentation and land-use change shape how, where and how much humans and wildlife interact in India's densely populated landscapes – highlighting both possibilities and limits of tolerance and space-sharing.

Despite being so strongly linked to the Sustainable Development Goals (SDGs)*, human-wildlife conflict continues to be overlooked by policymakers.

“If human-wildlife conflict is not adequately addressed by the international community, WWF believes it will have a considerable negative impact on countries’ ability to meet the majority of the SDGs,” says Dr Kinnaird. “If the world is to have a chance of meeting the SDGs by the 2030 deadline, human-wildlife conflict must be explicitly included in SDG implementation plans, as well as at the heart of the Convention on Biodiversity’s new framework**.”

Reducing human-wildlife conflict in this way can lead to opportunities and benefits not only for biodiversity and impacted communities but for society, sustainable development, production, and the global economy at large.

Notes to Editor
*Most of the SDGs have links to human-wildlife conflict, for example SDG #2: Zero Hunger. HWC link: Wildlife damages food stores, crops, and livestock and puts subsistence farmers at risk of hunger.
**The post-2020 global biodiversity framework is expected to be adopted in October at the Fifteenth meeting of the Conference of the Parties (COP15), where world leaders will sign a new 10-year commitment to protect biodiversity.
***The Kwando Carnivore Project started addressing human-wildlife conflict in 2013, initially by analysing the situations in which lion-livestock conflict occurred. Through a rapid documentation of losses by monitoring teams, strong community involvement, and the identification of high-risk conflict areas, an effective response was designed. Lion-proof cages were installed to protect cattle at night in risk-prone areas, and communities received support to offset any losses caused by lion predations. More details are available in the report (p59-60).
****These certified products are sourced from producers who actively minimise human-wildlife conflict. They include predator-friendly beef and goat's cheese from Namibia, jaguar-friendly coffee from Colombia, wildlife-friendly cashmere from Tuscany, Italy, and elephant friendly tea from India, and are available at retailers worldwide.
[1] Inskip C., Zimmermann A. (2009). Human-felid conflict: a review of patterns and priorities worldwide. Oryx 43(1):18.