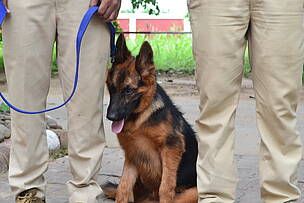 The 10th batch of the programme with six young German Shepherds dogs, ranging between six and nine months old, and their 12 handlers have begun their seven-month course at Basic Training Centre, Indo-Tibetan Border Police Force (BTC-ITBP) camp in Panchkula, Haryana.

The illegal wildlife trade has endangered the existence of many wild species across the globe. In India, it includes an array of wildlife products and derivatives such as mongoose hair, snake skins, rhino horn, tiger and leopard parts, elephant tusks, shahtoosh shawl, pangolin scales and much more. Wildlife law enforcement practices are critical in containing this threat, and the use of wildlife sniffer dogs for wildlife crime prevention and detection has been a game changer in India.

"With just two wildlife sniffer dog squads in 2008, our programme has successfully trained 88 dogs, and now six more are under training. Twenty-one states and union territories have participated in this programme and have deployed trained sniffer dog squads to fight against wildlife crime. The programme has grown to become the largest in the country," added Dr Merwyn Fernandes, Coordinator, TRAFFIC's India office.

He explained, “The dogs are being trained using the latest training tools to master sniffing and tracking skills for the scent of various wildlife products. Training is being scientifically conducted using modern conditioning techniques, including positive reinforcement through food and play rewards. Also, dogs will be exposed to various real-life search scenarios in populated and forest areas. We are confident that these new wildlife sniffer dogs will continue to help the enforcement officials curb illegal wildlife trade on completion of training."

The training of the 10th batch of six dogs at ITBP started on 5 September 2022. The first few weeks of the training will focus on developing an emotional and trusting bond between the dog and the handler, which is crucial to becoming a successful wildlife sniffer dog. Later, the dogs will learn sniffing and tracking skills and be trained to detect tiger and leopard skins, bones and other body parts, bear bile, red sanders, and other illegal wildlife products.
ENDS For any queries or more information, please contact Dilpreet B. Chhabra, TRAFFIC, India office at dilpreet.chhabra@traffic.org or call her at +91 9899000472 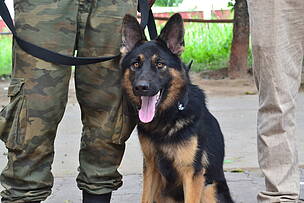 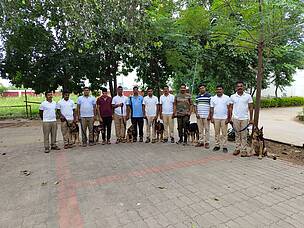