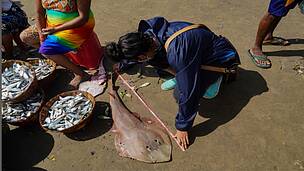 © WWF-India
WWF-India, in partnership with Sony India, is working closely with the fisher community along Goa’s coastline to conserve the Guitarfish

Goa: WWF-India in partnership with Sony India, today conducted the third session of the Fishermen Awareness Programme, to educate fishermen about protecting Guitarfish, a critically endangered species. Around 30 artisanal/traditional fishers of the Siridao Traditional Fishermen Association, from the village located in North Goa attended the session. The objective of this programme was to sensitise the fishing community about the importance of Guitarfish in the marine ecosystem and the need to conserve it.

Guitarfish, which are closely related to sharks and rays, are known to be found along the coast of Goa but little is known about their distribution and ecology. Guitarfish are important components of coastal socio-ecological systems. Seven species have been believed to be present in Goas’s coastal waters. There is also a concern that most of these species are either threatened due to habitat loss or are nearing extinction due to unintentional catch or bycatch.

WWF-India and Sony India are working together to study and conserve the guitarfish population along Goa's coastline. The project focuses on the interaction of the guitarfish with artisanal fishing gear. This includes traditional shore seine (Rampon) and gill nets deployed by fishers using small vessels with outboard motors.

Speaking about the initiative, Sanjay Bhatnagar, Director, Corporate Human Resources and CSR at Sony India, said, “We are glad to have partnered with WWF India as this initiative has provided us with a chance to contribute towards helping conserve endangered marine life, like the Guitarfish and making our best effort to save them from going extinct. While we bring the best-in-technology to the market, our aim is to make a positive difference in the lives and survival of these species and the community at large.”

The fishers were made aware of the ecology and morphology of guitarfish and how they can support improving the near-shore habitat of the guitarfish by managing discarded nets and other fishing gear. They also learnt about small efforts which would make a large impact on guitarfish conservation, like release of live individuals caught in their nets as bycatch. In the long term, the plan is to inculcate the idea of community-based coastal habitat conservation with the involvement of the fishing community.

While speaking to the fishermen, Aditya Kakodkar, Senior Coordinator, Marine Conservation WWF-India's Goa office, said that "Fish are a staple diet of Goa's population and meso-predators such as the Guitarfish play important role in maintaining a healthy ecosystem in the intertidal zone, which are also our fish nurseries. The long-term objective of the partnership is not only to conserve guitarfish to bring focus to the larger aspect of coastal biodiversity conservation through community participation.”

The fishermen awareness sessions have disseminated useful information about Guitarfish conservation to the local small-scale fishers. Sony and WWF-India intend to continue to study different aspects of guitarfish ecology and its conservation. These efforts will contribute towards boosting our understanding of the guitarfish population and our coastal environment. WWF India also aims to work closely with the local fishing community towards the conservation of endangered species. WWF-India and Sony India believe that meaningful conservation can only occur with the support and involvement of the local communities.

The conservation initiative with WWF is part of Sony India’s broader CSR schemes. The programme kick-started in April 2021, with three objectives - to map the habitat and distribution of guitarfish along the coast of Goa, improve knowledge and raise awareness about their conservation amongst the fishermen communities, thereby reducing the threats due to fisheries. 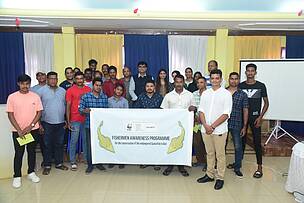