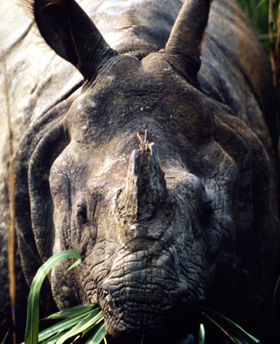 Indian one-horned rhinoceros
© Gerald S. CUBITT/WWF
Manas/Guwahati/New Delhi, April: In one of the biggest conservation successes in India, two male adult Indian rhinos (Rhinoceros unicornis) were successfully translocated to Manas National Park on Saturday. This is the first time that the translocation of wild rhinos has been conducted in the state of Assam, where nearly all of India’s rhinos are found.

Pobitora Wildlife Sanctuary, where the two rhinos were moved from, has the highest density of rhinos in the world, with more than 80 rhinos in less than 18 square kilometers of rhino habitat. For the next several years, the healthy rhino populations in Pobitora and Kaziranga National Park will supply individuals to start new populations in Assam’s other protected areas under Indian Rhino Vision 2020.

Translocations form the backbone of IRV 2020 – a joint project of the Government of Assam and WWF-India, supported by the International Rhino Foundation and U.S. Fish and Wildlife Service – that aims to attain a population of 3000 wild rhinos in seven of Assam’s protected areas.

Speaking about the translocation earlier, Mr. Rockybul Hussain, Minister for Environment and Forests of the state of Assam said, “Rhinos are pride of Assam. I wish IRV 2020 success”

Meticulous planning for the translocation, carried out under tight security, spanned several months. Mr. M. C. Malakar, Chief Wildlife Warden, Assam, elaborated, “Our prime concern was the safety of the people associated with the translocations as well as that of the rhinos being moved”. He added, “We are grateful to all for the cooperation that they extended in helping us conduct the translocation.”

Explaining the concept of translocation, Tariq Aziz, Associate Director of WWF-India’s Species Programme, said, “It may be risky to do translocations, but it would be riskier not to do anything at all. With more than 86 percent of India’s rhinos living in one national park, these national treasures are at risk if an outbreak of disease or other calamity hits Kaziranga. The translocations will help rebuild rhino populations in Manas and a few other protected areas in Assam where the rhino populations once existed.”

Under the guidance of expert veterinarians, conservationists and forest department officials, the two animals were captured on Friday and released in the wee hours of Saturday. The entire exercise was carried out in accordance with IUCN’s norms for translocation. The animals were captured by darting tranquilizers, and then transported 250 km away in specially designed crates that could withstand the 1.5 to 2 tonnes of body mass of these large pachyderms.

The arrival of rhinos has also brought a cheer amongst the local communities in Manas National Park. A Project Tiger and a UNESCO-designated World Heritage Site, Manas National Park is one of the nine biodiversity hotspots in India. It was home to several endangered species, including the Indian rhinos, before local disturbances led to its eradication.

Curious onlookers greeted the convoy and were excited to learn that the park would have rhinos again. A 55-year-old local woman said, “The arrival of gainda (rhino) is like a Bihu (a local festival) gift to us”. She added, “My son is one of the volunteers who will be monitoring the rhinos in Manas. It is a great moment for all of us”.

As part of the IRV 2020, significant steps have been taken to improve the infrastructure of Manas National Park. Sujoy Banerjee, Director, WWF-India’s Species Conservation Programme, explained, “We have provided vehicles, wireless sets, helped built watch towers, bridges, road etc. In fact, the bulk of resources have gone in resurrecting the monitoring mechanism of the Park, which had suffered serious damage in the past.”

Notes to the Editor:
1. IRV2020 is a joint project of the Government of Assam and WWF-India, supported by the International Rhino Foundation and the U.S. Fish and Widllife Service. It aims to increase the rhino population in Assam to 3000 by the year 2020. These rhino populations will be built up over at its seven protected areas to provide long-term viability to the rhino meta population in Assam.
The conservation of rhinos in Assam and India has been a great success. Through strict protection, the declining population of 10-20 rhinos in 1905 has recovered to more than 1800 individuals in 2007. But now, more than 86 percent of India’s rhinos live in just one national park, Kaziranga. The IRV2020 project will further improve the security of all rhinos in Assam by expanding the distribution of rhinos to reduce risks like disease, in-breeding depression and mass mortality. The project also aims to reduce the rhino population pressures in any single habitat by ensuring a better distribution of the rhino population over suitable ranges.