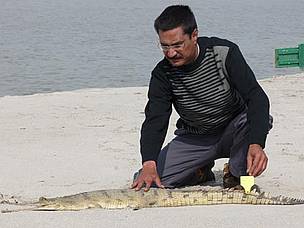 Dr. Parikshit Gautam, Director, Freshwater & Wetlands, WWF India with released gharial
© WWF-India
January 29th and February 12th can be marked on WWF-India’s calendar as historical. In a task that was no shorter than being termed as herculean, WWF-India along with the UP State Forest Department reintroduced the Gharial into River Ganga at the Hastinapur Wildlife Sanctuary (HWLS), U.P.

The status of the crocodilian species Gharial, Gavialis gangeticus has recently been revised by the IUCN to Critically Endangered. The surviving population is spread in less than half a dozen habitats eg-Ken, Son, Mahanadi, Chambal, Girwa and Ramganga. Estimates indicate that 1400 individuals survive in the wild. In order to address the conservation needs of this species, it is necessary to locate viable alternative habitats which supplement the extremely few habitats where the species currently occur.


The target reintroduction area was very well suited for the release. The site was selected after a survey conducted by the state forest department officials and WWF-India. The area has been inhabited by wild Gharials in fairly recent times. A female Gharial (3.63 m) inhabited this area as late as 1994. Another Gharial was rescued here in 2006-07 and released into the Ganges at a spot further up stream near Bijnor. Also, easily recognizable features of Gharial habitat like perennial stream with deep pools, undisturbed mid-river sand bars, high and steep sand banks for nesting, and multi-stream braided channels with stagnant eddy counter-currents occur in this stretch of the river. An awareness drive amongst the local communities was also conducted along the river bank to ensure community participation prior to reintroduction of these species into the Ganga.

Immediately below the Hastinapur Wildlife Sanctuary, the Ganges River and its environs downstream to the Ganga Irrigation Barrage at Narora have been declared as a Ramsar Site with its own conservation implications. The area is currently the focus of a dolphin conservation programme of WWF-India which will definitely benefit Gharial conservation, monitoring and protection.

In the second phase 71 Gharials were released of which there were 19 males and 52 females. These weighed 7-16 kg and measured approximately 1.20-1.80 m in length. Intensive post-release monitoring is underway and it has been observed that these individuals have negotiated 10 kilometer downstream and 2.5 km upstream of the release site. These release programmes will be sustained for a number of years until a resident breeding population of Gharial is established at a favourable location in the river.

The objectives of the reintroduction will be achieved through people participation and regular monitoring of sections of the Ganga River and studying the response of the released Gharial in terms of ability to permanently adapt to the environment. Rescue operations for Gharial individuals will also be done, which could drift downstream of protected areas. The local communities have expressed support and solidarity for ensuring the return of the Gharial in this area. With the success of this project it is hoped that these species sees resurgence.