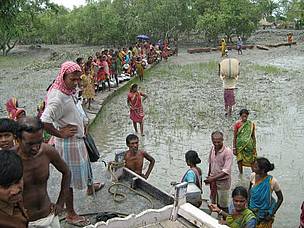 Que for drinking water at Sardar Para, Tipligheri copy
© Arjun Manna/WWF-India
Sunderbans, India: Tropical cyclone AILA with wind speeds up to 116 km/hr passed through the state of West Bengal on Monday, 25 May, leaving behind a trail of destruction. The district of 24-Parganas South bore the brunt of this cyclone, although it has wreaked havoc in the entire state from the coast to the mountains of northern Bengal. Almost half a million people have been affected according to latest reports. Heavy rainfall has submerged villages across the Sundarbans and most are still water-logged. People have taken shelter in schools, Panchayat buildings, hospitals, markets, and even on roads. Health and hygiene has become a serious issue due to the large number of deaths of domestic animals. Three days later, some parts of Kolkata City are still without electricity and water.

Initial reports indicate that the administrative blocks in middle and eastern Sundarbans are worst affected. These are Gosaba, Sandeshkhali I and II, Patharpratima, Kultali and Basanti. Communication networks have been disrupted and inhabitants of many islands are still unreachable. The larger picture of the full impact of the disaster is not yet clear. WWF-India and other agencies have fanned out for a rapid assessment of the situation.

Says Anurag Danda, WWF India’s Sunderbans Programme Head, “It is clear that many of the communities that we are currently engaging with directly, have been badly hit and all the livelihood work undertaken so far might have been washed away. In Sandeshkhali area, where assistance for sustainable shrimp farming is being given, it is feared that all the shrimp, farms practicing sustainable shrimp farming might have washed away. Our field staff had also hoped to reach Hingulgunj village bordering Bangladesh (where most of WWF-India’s solar lights are installed) through one of the Inter Agency Group network members but this had to be put off due to inaccessibility.”

Impact on wildlife and on WWF-India’s work:
Wildlife deaths have been reported from the Sunderbans. At least a dozen deer carcass have been spotted in and around Tipligheri village, one of WWF-India’s areas of operation in eastern Sundarbans. As expected of a situation like this, there is speculation about tiger deaths but there are no figures yet. Although tigers in Sunderbans are known to be good swimmers, it is not known how they have fared against the cyclone. A tiger that strayed into Jamespur village has been rescued by Forest Department and released back into the wild. Anurag Danda is in touch with the Field Director, Sunderbans Tiger Reserve and Joint Director, Sundarbans Development Board to ensure a rapid response and support from WWF India as needed.

What WWF-India is doing:
Field staff of WWF-India is coordinating with the forest department, other NGOs and UN agencies to provide relief. Two field staff have reached different sites and have set up relief operations. WWF-India’s Resource and Disaster Relief Centre that was recently inaugurated in Mosuni island was used to temporarily shelter the displaced. Twelve households had taken shelter there and have since returned to their homes, as the cyclone moved away. Staff is also trying to source relief supplies from Kolkata for the communities they work in Kultali and Gosaba Blocks. WWF-India’s state office is trying to reach the communities in Sandeshkhali I & II blocks in North 24-Parganas.

It is not known how much of this area will be left cultivable due to salinity damage. But this is a high possibility due to surging of tides that may have left seawater on the many islands here. Even before the cyclone hit here, WWF-India was helping local farmers plant salt-tolerant paddy varieties to over come this problem. Also, as an adaptive strategy against frequent sea water incursion, WWF-India is already encouraging local aqua farmers to cultivate sea bass. This can help ensure they have an assured supply of food in cases like the one we have seen now.

WWF-India will always stand by the Sunderbans and its inhabitants, and this cyclone is no obstacle to the team’s dedication. We have provided and will continue to provide the support needed to ensure the future of this critically and globally important area. Individuals and oganisations interested in assisting us in providing relief are welcome to contact Anurag Danda or Sejal Worah at the addresses below.

Related Internet Links
WWF-India is not responsible for the content of external internet sites.